Moton: Don’t Overthink This, Acquiring Jalen Ramsey Would Be a Good Move 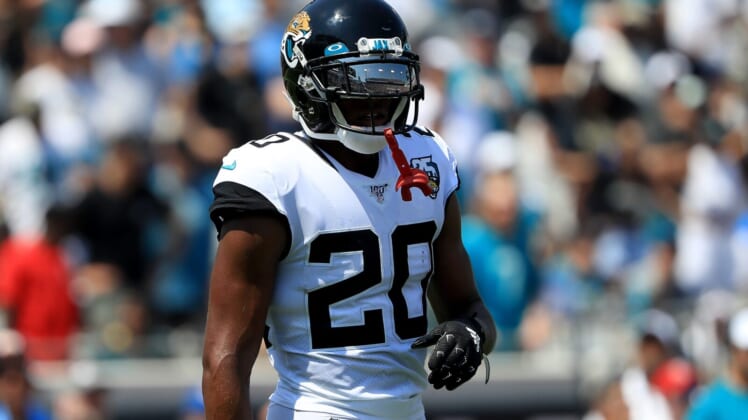 JACKSONVILLE, FLORIDA – SEPTEMBER 08: Jalen Ramsey #20 of the Jacksonville Jaguars lines up during the game against the Kansas City Chiefs at TIAA Bank Field on September 08, 2019 in Jacksonville, Florida. (Photo by Sam Greenwood/Getty Images)

Raider Nation and media alike are speculating on if the Raiders will make a move to get Pro Bowl cornerback Jalen Ramsey who has requested a trade from the Jaguars. Does it make sense for Oakland? You bet it does says our Sr. NFL Columnist Moe Moton.

Jacksonville Jaguars star cornerback Jalen Ramsey engaged in a heated sideline confrontation with head coach Doug Marrone over a third-down play that the cover man wanted to challenge Sunday. The situation quickly escalated into a trade request from the player’s agent, per ESPN’s Adam Schefter.

Here’s the question: How hard should the Oakland Raiders push for the shutdown defender?

First off, according to The Athletic’s Vic Tafur, the team inquired about him.

If the Raiders stick by their mantra, “Just Win Baby,” the All-Pro cornerback fits the mold.

Now, let’s remove emotion from a disappointing 28-10 loss to the Kansas City Chiefs. Ramsey isn’t going to fix the Raiders’ offensive woes when running back Josh Jacobs and right tackle Trent Brown have to step out of the game.

However, Ramsey could cut the field in half and provide an obstacle in quarterback Patrick Mahomes’ pathway of destruction in the AFC West. Keep in mind he lined up on the perimeter, in the slot and as a safety at Florida State.

Looking Back At Mike Mayock’s Comments

When Raiders general manager Mike Mayock held a draft analyst position with NFL Network, he made glowing comments and an intriguing assessment on Ramsey’s playmaking ability:

“I think most teams would like to believe he’s a corner because there’s more value attached to that. Could he be Patrick Peterson, for instance? He’s got length, he’s got world-class speed. Even when he gets beat off the line of scrimmage in press coverage, it’s amazing to see his catch-up speed. It’s like beep, beep and he’s there. That’s on the positive side.“

Ramsey hasn’t played a lot of safety with the Jaguars, but you’d have to wonder if the Raiders would be open to moving him around a lot more in the secondary.

Here’s the interesting part about Mayock’s analysis, which may appeal to the Raiders right now. He talked about Ramsey as a free safety.

“Everybody loves him. Everybody believes in him, but what about his on-ball productions at the corner position? Everybody knows he can play free safety. With his eyes on the quarterback, would he be effective in turning the ball over more frequently using that great speed at free safety?”

Ramsey hasn’t played a lot of safety with the Jaguars, but you’d have to wonder if the Raiders would be open to moving him around a lot more in the secondary.

What Could the Raiders Offer for Ramsey?

MMQB‘s Albert Breer reported the Jaguars want two first-round picks, which sounds a Khalil Mack-type deal that Raiders fans want to forget going forward. It’s unlikely a team would part with a pair of top-32 selections in the next two years for a cornerback—that position hasn’t matched the premium talk around edge-rushers.

The Raiders can offer one of two first-round picks—either their own or the Chicago Bears selection acquired via the trade involving Mack and one of two third-rounders, one of them originally belonging to the Bears. Oakland can also toss in a player, but who?

The Raiders can offer one of two first-round picks—either their own or the Chicago Bears’ selection acquired via the trade involving Mack and one of two third-rounders, one of them originally belonging to the Bears. Oakland can also toss in a player, but who?

Oakland declined Karl Joseph’s fifth-year option. Before Mayock’s hiring, the team dangled the 2016 first-rounder on the trade block last year, per Fox Sports‘ Jay Glazer. There’s one other option if the Jaguars have no interest in the fourth-year safety or a third-round pick.

According to Tafur, the Raiders went into the 2019 season with questions about Gareon Conley.

“The coaching staff won’t say this out loud but they are not totally sold on him, and the drafting of Trayvon Mullen in the second round impacts Conley as much as it does Daryl Worley, the Raiders’ other top cornerback,” Tafur wrote.

In flashes, Conley has shown the ability to play at a high level. After a lost rookie year because of a shin ailment, which required surgery, the Ohio State product logged 15 pass breakups and three interceptions in 2018.

Through two weeks, Conley has provided little impact. He took a knee to the helmet in the season opener and couldn’t finish the game. Mahomes targeted him six times and completed four passes for 76 yards and a touchdown Sunday, per Pro Football Focus.

Conley could bounce back from a rough start, but he’s clearly not on Ramsey’s level yet. We know Gruden can be impatient at times, so why not swap potential for a finished product? Ramsey has an All-Pro campaign on his resume with the fifth-most pass breakups (45) since 2016. By the way, he just stifled arguably the best wide receiver in the game, DeAndre Hopkins, Sunday, per PFF:

The Raiders would have to pay Ramsey as well, but that’s not a big deal since the roster doesn’t have a player who deserves a massive payday in the near future. The team already extended center Rodney Hudson’s deal through 2022. Derek Carr’s five-year, $125 million pact lists eighth among quarterbacks in contract value, per Spotrac; it’s no longer a cumbersome deal with the cap increases over the years.

Also, remember, Oakland voided wideout Antonio Brown’s $30 million contract guarantees before releasing him. The Raiders have the cash to pay a top-dollar asset; they’re on track for $91.3 million in cap space for the 2020 offseason.

Countering Arguments Against Trading For Ramsey

“They didn’t pay Khalil Mack, why would they pay Jalen Ramsey?”

Ramsey’s new deal would top Washington Redskins cornerback Josh Norman, who signed for $50 million in guarantees during the 2016 offseason. In terms of contract value, Miami Dolphins cover man Xavien Howard inked a five-year, $75.25 million pact in May. The Jaguars cornerback wouldn’t cost Oakland nearly as much as Mack.

Believe it or not, disagreements in the heat of competition happen often in the NFL. Marrone and Ramsey had a shouting match—no one threw a punch or punted a football in protest. He’s outspoken, but the Jaguars cornerback isn’t frequently in the headlines for his social media posts or questionable off-field decisions.

Assuming the Raiders ink Ramsey to a new deal upon a trade, most of the noise about his Brinks truck arrival to training camp will go away. On the Bussin with the Boys podcast, he mentioned Las Vegas as an ideal place to play. As the 24-year-old said in a press conference today, it’s about winning games.

Although Ramsey wants out of Jacksonville, he’s not talking through social media like Brown did. Looking at the situation from his shoes, an underpaid star player on a losing team will thin a player’s patience. If the Raiders stick by their mantra, “Just Win Baby,” the All-Pro cornerback fits the mold.

“Without a pass rush, it’s pointless to acquire a star cornerback”

Many fans believe in Mayock’s draft expertise. Those who fit into that category should see the glass half-full with No. 4 overall pick defensive end Clelin Ferrell. The Raiders can use their remaining 2020 first-rounder on another defensive end if Maxx Crosby isn’t a starting-caliber player or Arden Key comes up short on the opposite side.

The Raiders pass rush doesn’t look much improved now, but we saw flashes in the first game. Secondly, it’s irrational to expect a defense that logged 13 sacks to show night-and-day improvement in two games.

In the meantime, why not acquire a proven product who will allow the front seven to record coverage sacks while he locks down receivers on the back end? We saw that against the Denver Broncos. In moments, quarterback Joe Flacco had nowhere to throw the football because of the airtight defense downfield.

Sometimes, we overthink transactions. In three seasons, Ramsey has proved he’s an elite player. Furthermore, this move would go a long way in countering Mahomes within the division. The Raiders have to find ways to slow him or his weapons down; this is a logical move toward that goal.

Premier players cost a lot of money and resources; the Raiders have an abundance. They added young cornerstones in this year’s draft—now they can pay for ready-made talent.