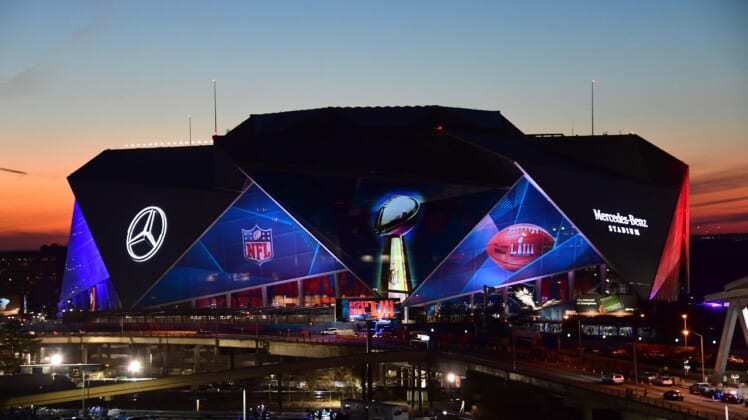 It’s finally almost here. After almost two weeks of never-ending stories that remain cringe-worthy to this day, Super Bowl LIII between the Los Angeles Rams and New England Patriots will kick off in a few days.

As has been the case since the NFL decided to have a week off between Championship Sunday and the big game, we’ve been inundated with narrative after narrative.

This year, that includes the Patriots somehow viewing themselves as underdogs and the NFL continuing to step on itself — led by Commissioner Roger Goodell.

In terms of the game itself, we’re highly intrigued to see how young head coach Sean McVay will do against the GOAT that is Bill Belichick. The same can be said about Jared Goff taking on the game’s biggest winner, Tom Brady.

These are among the 10-most interesting storylines heading into Super Bowl LIII in Atlanta Sunday evening.

Brady recently opened up about what it would mean for him to win a record sixth Super Bowl title. Already considered the greatest of all-time, another Lombardi Trophy would end any debate regarding Brady’s status — even long after he eventually decides to call it quits.

It’s simply remarkable how dominant the Brady-led Patriots have been since he took over from Drew Bledsoe as the team’s starter back in 2001. He boasts a 207-60 regular-season record and has earned an appearance in the AFC Championship Game 13 times. Talk about ridiculous.

The NFL Commissioner had to know that his State of the League press conference earlier this week wasn’t necessarily going to paint him in the best of lights. Goodell was quiet for well over a week after officials blew a late-game call in the NFC Championship Game between the Rams and Saints. Once he did talk about the drama, the highly-embattled commissioner provided nothing more than a company-line response.

Immediately prior to the presser, a well-known women’s group called for NFL owners to fire Goodell over the league’s handling of domestic and sexual violence. It didn’t get much better for Goodell after he broached the Colin Kaepernick situation. The commish pretty much said if Kaepernick were good enough, he’d be on an NFL team. Push back was heavy in response to that comment.

For Goodell’s sake, we hope everything goes swimmingly in Atlanta on Sunday. If there’s multiple bad calls in the game, it will continue to paint the NFL in a bad light. This week is supposed to be a celebration of football. Instead, it’s turned into a soap opera. That’s on Goodell.

Optics surrounding Super Bowl LIII couldn’t be any more different with these two head coaches. Patriots head man Bill Belichick will be appearing in his ninth Super Bowl. Sean McVay was just 16 years old when Belichick first led these Patriots to the big game back in February of 2002. That’s simply insane stuff right there. Having already built up his own coaching tree, the 33-year-old McVay is attempting to make a statement here. The old guard is over, and it’s time to move on to a new era of NFL football.

There’s also a rather interesting backstory as it relates to both coaching staffs. The Patriots will lose “defensive coordinator” Brian Flores to the Miami Dolphins. The soon-to-be new Dolphins head coach will be bringing wide receivers coach Chad O’Shea with him. Meanwhile, Rams quarterbacks coach Zac Taylor is expected to be the Bengals’ new head coach. He’ll likely bring a lot of assistants with him to Cincinnati. Yeah, both staffs will be somewhat gutted after Sunday’s game comes to a conclusion.

Do the Rams even belong in Atlanta?

It seems to be a ridiculous question on the surface. Los Angeles finished this past regular season with a 13-3 record and as one of the top teams in the NFL. It boasts the best young coach in the NFL and a true MVP candidate in running back Todd Gurley. Defensive tackle Aaron Donald remains the best player on that side of the ball in the NFL. That’s all fine and dandy, but we know the narrative here.

It stems from a blatant missed call late in the NFC Championship Game — one that has sent shock waves through the sport. It’s impossible to blame one call on the outcome of a game. But if the officials inside the Superdome would’ve called PI against the Rams, New Orleans would almost undoubtedly be playing in Super Bowl LIII against the Patriots. Alas, it’s not to be. One has to wonder if the football gods will correct themselves here — leading to a Patriots whitewashing of the Rams.

New England obviously didn’t like that fact that it was an underdog in the AFC Championship Game against the Kansas City Chiefs. It’s now bled over to Super Bowl Week, with Tom Brady and Co. continuing to play this card. Unfortunately for that narrative, New England is currently 2.5-point favorites over the Rams. Literally, the Patriots are not underdogs in this one.

The entire concept is about as ridiculous as it gets. These Patriots are in the midst of the greatest dynasty in NFL history an potentially in the history of the four major North American sports. To continue with this charade is akin to the Golden State Warriors somehow playing an underdog card in the NBA. We’ll find out soon enough if the “lack of respect” for these Patriots is justified once Sunday comes calling. Until then, give it a rest.

One of the under-the-radar storylines heading into Super Bowl LIII, Cooks will take on the very same Patriots team that traded him to the Rams last offseason. This comes after he helped Los Angeles dismantle another team that had moved on from him — the New Orleans Saints — in the NFC Championship Game.

One of the most-productive receivers in the NFL over the past few seasons, the 25-year-old Cooks finally has a home in Southern California. He signed an extension with the Rams prior to his initial season with the team and went on to put up yet another 1,000-yard campaign. Set to take on Stephen Gilmore come Sunday, we know full well that Cooks will want to exact revenge against his former team. That’s for sure.

We can talk about the likes of Tom Brady, Rob Gronkowski, Jared Goff and Todd Gurley until we’re blue in the face. But Super Bowl LIII could very well be decided in the trenches. Led by a surprising left tackle in Trent Brown, Brady has seen pass protection hold up in a big way. He was sacked just 21 times during the regular season and has not yet been taken down in the playoffs.

We’re intrigued to see how Brown performs against Dante Fowler Jr. after the latter pretty much ended the Saints’ season two weeks ago. Though, it’s more about the inside of the lines. Defensive tackles Aaron Donald and Ndamukong Suh represent the best interior tandem in the NFL. The onus here is going to be on guards Joe Thuney and Shaq Mason to hold up for Brady in this one.

The backstory heading into Sunday’s Super Bowl remains the quarterbacks. Given that Brady has started more postseason games than Goff has started regular-season games throughout their careers, that’s magnified even further.

Will experience play a role here or is Goff prepared to show the NFL world that a new era is upon us? How that question is answered will play a huge role in the outcome of the game. What we do know is that Brady is more than prepared to take on a youngster whose father was still playing in Major League Baseball when Brady himself was drafted by the MLB’s Montreal Expos in 1995. Whew.

First LA team to play in big game since 1984

This is the first time the Rams have played in the Super Bowl as a Southern California team since all the way back in 1979. Los Angeles lost the big game that year to Terry Bradshaw and the Pittsburgh Steelers. To put this into perspective, Brady was less than two years old at that time.

The last Los Angeles team to partake in the NFL’s biggest game was the Raiders back in January of 1984. Certainly, fans in Southern California will look to change the narrative that they don’t care about their two NFL teams. It’s a big day for the city — one that packs a lot of pressure for Sean McVay and the Rams.

By now, it’s well known that Rams running back Todd Gurley struggled big time in the NFC Championship Game. He put up just 10 yards on four attempts — taking a back seat to veteran C.J. Anderson in the process. This came after Gurley’s early-game mistake cost the Rams points. For his part, Anderson has been stellar since the Rams signed him off the street late in the regular season. All he’s done is put up 366 rushing yards in four games. Though, Gurley remains the true joker here. He’s the reigning NFL Offensive Player of the Year and could very well win that award again this season.

The situation is different in New England in that Bill Belichick and Co. have three reliable running backs to share the wealth. Rookie Sony Michel has scored five touchdowns in two postseason games. Meanwhile, catch-first back James White has recorded 19 catches during that span. How the running back situation plays out Sunday could tell us the entire story of Super Bowl LIII.