Monday Night Football: Winners and losers from Chiefs thrashing of the Ravens 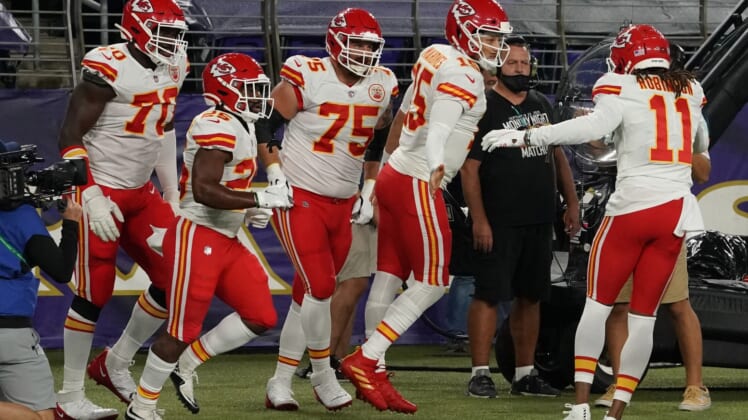 It was billed as one of the best games on the 2020 NFL schedule. The defending champion Kansas City Chiefs going up against one of the top contenders in that of the Baltimore Ravens. The two most-recent NFL MVP winners, Patrick Mahomes and Lamar Jackson, doing battle.

Apparently, 2020 found a way to let us down again. The game was not competitive after Baltimore opened the scoring with a mere field goal. Kansas City jumped out to a 27-10 halftime lead by virtue of four total touchdowns from Mr. Mahomes. Tyreek Hill continued to do his thing. Meanwhile, Jackson struggled to do much of anything early and often.

The end result was a resounding 34-20 win for the Chiefs and the likelihood that Tuesday morning quarterbacks will already crown them Super Bowl LV champs. Here are the biggest winners and losers from Kansas City’s 14-point blowout victory over the Ravens.

Winner: Patrick Mahomes is not human

The reigning Super Bowl MVP was on absolute fire early in Monday’s game against Baltimore. This included him putting up 239 passing yards and four total touchdowns in the first half, breaking an NFL record in the process. It really was a sight to behold seeing Mahomes tear apart an elite Ravens defense.

Loser: Marcus Peters was swiss cheese against his former team

Ouch. This former Chiefs Pro Bowler was burnt multiple times by his old team Monday night. We’ll give him a pass for yielding this 20-yard touchdown catch to Tyreek Hill. That’s just not defendable. However, Peters was also burnt later in the game when he took a terrible route on a Mecole Hardman touchdown.

A former first-round pick of the Chiefs back in 2015, Peters is among the best ball hawks in the entire NFL. With that said, he also takes some chances. It’s part of the reason he’s given up big plays in the past. This showed up more than one time against Kansas City in Week 3.

I was an advocate of both J.K. Dobbins and Jonathan Taylor going ahead of this former LSU standout ahead of the 2020 NFL Draft. In fact, it was surprising that Kansas City selected Edwards-Helaire in the first round this past April. Apparently the defending champions knew more than armchair experts. This kid was absolutely dynamite Monday evening, going for 134 total yards on 25 touches.

This comes after Edwards-Helaire put up north of 200 total yards at a clip of 5.1 yards per touch through the first two games of his career. Joe Burrow could very well have some competition for NFL’s Offensive Rookie of the Year honors. This back is just a perfect fit in Kansas City’s offense.

The reigning NFL MVP did damage on the ground Monday evening, going for 84 yards on nine attempts. Unfortunately, that did not translate to the passing game. When Ravens receivers weren’t dropping passes, Jackson was struggling with accuracy. All said, he completed 15-of-28 passes for 70 net passing yards in a brutal overall performance.

This will continue to lead to unjustified questions about Jackson’s ability to come up big when the attention is on him. We saw it during Baltimore’s playoff loss to the Tennessee Titans last season. However unfair that might be, it’s clear that the stud young quarterback is not on the same level as Patrick Mahomes.

There’s a reason why Kansas City inked Jones to a massive contract during the offseason. His ability to provide a pass rush from the interior of the team’s defensive line is absolutely huge. Most quarterbacks tend to struggle more with pressure up the middle than out on the edge. We saw that with Jackson Monday evening.

Jones recorded five tackles, two quarterback hits and two sacks of Mr. Jackson in Kansas City’s 34-20 win. It was a downright dominant performance against what has been a darn good Baltimore offensive line in recent years.