Defensive backs tend to have the most impact of any player on the football field. Their ability to both stop the pass while forcing turnovers can change a game on the time.

While there’s some debate about who the best cornerbacks and safeties are around the NFL heading into the 2018 season, we’re not going to get too much into that.

Instead, the focus here is on the top ball hawks in the league today — players that change the outcome of a game due to their ability to force turnovers and break up would-be first downs.

From two new members of the Los Angeles Rams to a future Hall of Famer in San Francisco as well as multiple longtime veterans, we check in on the 15 best ball hawks in today’s NFL. 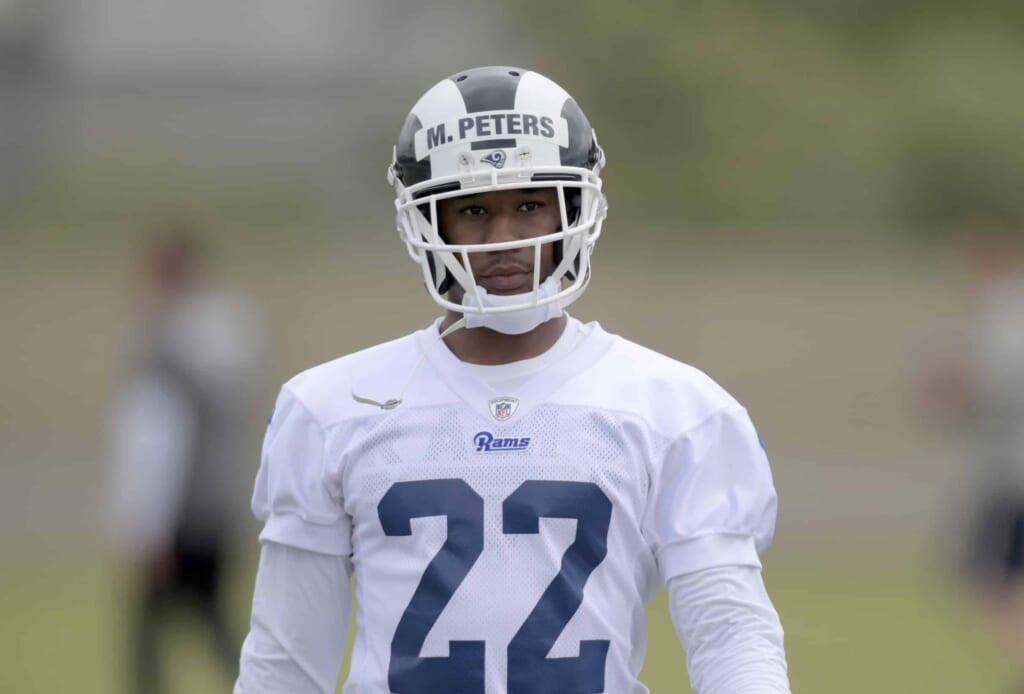 If we were to rank cornerbacks in today’s NFL, there’s an argument that Peters might not be in the top five. He gets burnt way too often for a player many view to be elite. Targeted more than any other cornerback in the league last season, Peters gave up more 20-plus yard completions than all but five regular defensive backs. He also yielded a sub 70 passer rating for the third consecutive year to start his career and boasts an NFL high 19 interceptions since the start of the 2015 season.

This ranking is based solely on Peters’ ability to force turnovers and make the big play. He’s a true representation of a ball hawk in today’s NFL. As a sniper in zone coverage, Peters’ ball-hawking ability will be taken to a whole new level in his first season with the Rams under defensive coordinator Wade Phillips.

At this point, it would be hard to argue against the idea of Smith being the best defensive back in the entire game. He boasts the best coverage radius of any safety in the NFL. Naturally, this has helped the likes of Xavier Rhodes and Co. perform at a high level outside in Minnesota’s elite-level defense. But last season saw Smith take his game to an entirely new level.

In putting up his third consecutive Pro Bowl appearance, Smith racked up a ridiculous 12 passes defended and five interceptions from the free safety position. It was the second time in four seasons that this former Notre Dame standout put up five-plus picks. This past season also saw Smith become the first player in league history to record 25-plus stops and five interceptions while yielding exactly zero touchdowns in coverage. That’s insane stuff. 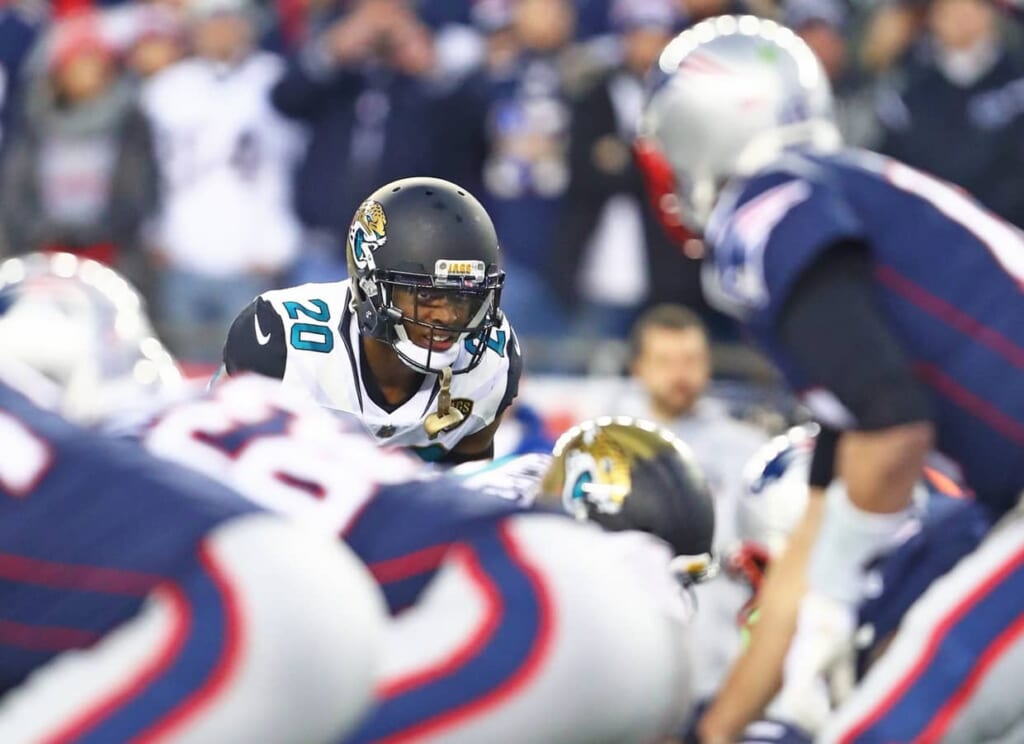 Ramsey’s on-field and off-field swag is only matched by his ability to shut down some of the best receivers in the game. He’s truly been a treat for what has increasingly become one of the game’s best defenses. In just his second NFL season, Ramsey recorded 17 passes defended and four interceptions en route to earning All-Pro honors. He’s not even in his prime, which has to be a scary thought for opposing AFC South offenses.

More than these basic stats, the 23-year-old Ramsey is quite simply the most imposing corner in the game. According to Pro Football Focus, Ramsey graded out second among corners in coverage last season and yielded an absurdly low sub 45 percent completion percentage when targeted. Add in his ability to force turnovers, and Ramsey is already one of the game’s biggest difference makers.

Certainly, Rhodes is helped out by the presence of Harrison Smith at free safety. It’s somewhat akin to what we saw with Richard Sherman and Earl Thomas in Seattle. Even then, it’s hard to take anything away from what Rhodes has done since being a first-round pick of the Vikings back in 2013.

The former Florida State standout has put up 59 passes defended in four NFL seasons. He’s also added nine interceptions during this span. While the interception total might be a tad low, Rhodes’ presence as a ball hawk in the Vikings’ secondary is magnified by his ability to break up passes. That’s what helped lead to the NFC’s best pass defense last season. 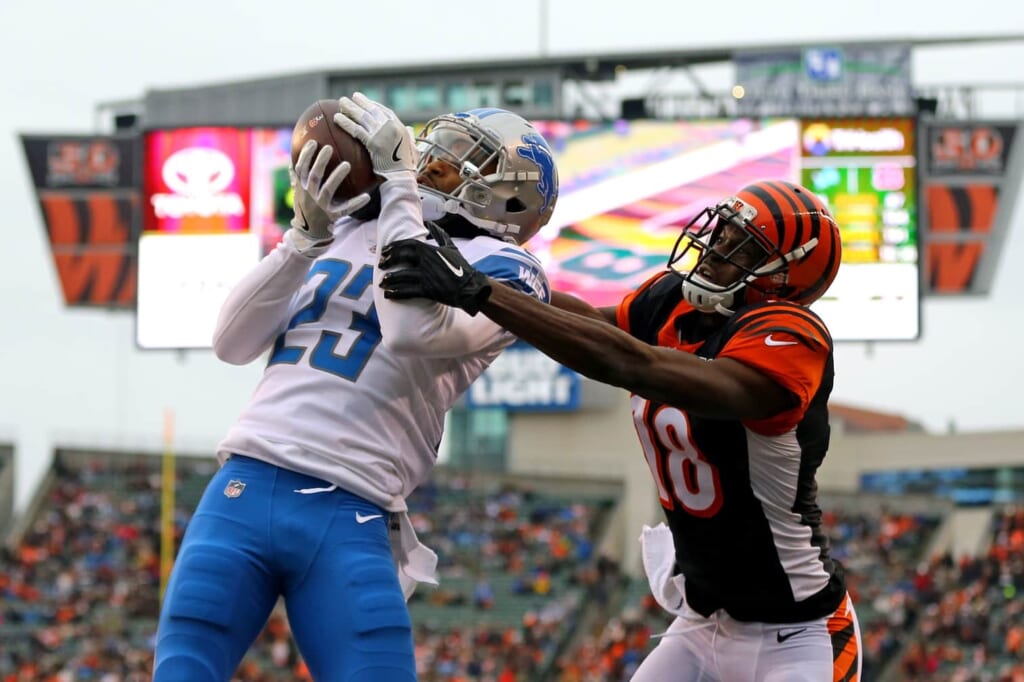 Rarely mentioned among the game’s top corners, all Slay does is force turnovers in what has been an otherwise horrible Lions secondary. He doesn’t have elite safety help over the top like other cornerbacks on this list. That’s what makes the eight interceptions Slay recorded last season so amazing. He’s pretty much doing it on his own. And to lead the NFL in that category is quite astonishing.

Slay’s presence in the top five is justified by the fact that he also led all NFL defensive backs in pass breakups plus interceptions a season ago. He’s not a one-hit wonder. When the former Mississippi State standout isn’t forcing turnovers, he’s helping get Detroit’s defense off the field.

Length of excellence certainly has to be a factor in this debate. If so, there’s very little question that Weddle pretty much stands above the rest. Having earned his first Pro Bowl appearance as a member of the then San Diego Chargers back in 2011, the 33-year-old Weddle continues to remain at the top of his game. He leads NFL safeties with 10 interceptions over the past two seasons and has recorded 20 passes defended as well as three forced fumbles during that span.

Weddle’s presence as the centerfielder in an other questionable Ravens’ secondary also helped this unit yield an opposing quarterback rating of 72.4 last season. That’s the hallmark of truly legit ball hawk. 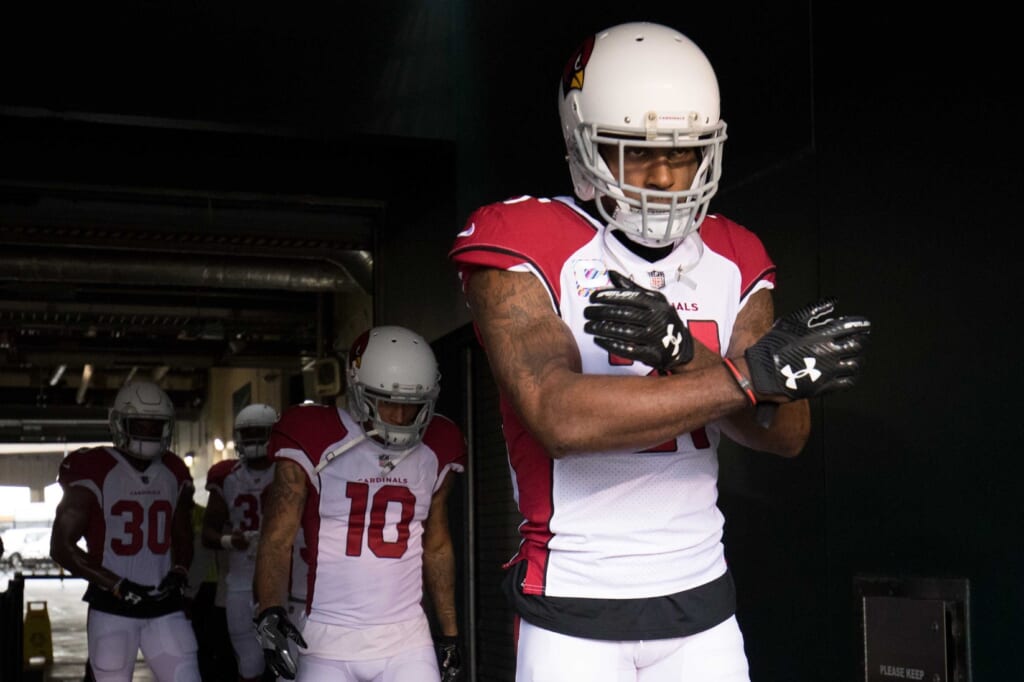 While Peterson has lost a step or two in recent seasons, it’s hard to argue that he still isn’t among the game’s best cornerbacks. While navigating through a multitude of injuries in the Cardinals’ secondary, Peterson was thrown to at a lesser clip than all but three cornerbacks in the NFL. That’s one of the primary reasons that his interceptions and other cornerback-specific numbers were down last season. After all, he recorded just one interception and eight passes defended.

Now set to star in a different scheme under first-year defensive coordinator Al Holcomb this season, we expect Peterson’s numbers to increase a great deal. He’ll no longer be shadowing the opposing team’s No. 1 receiver. That will give Peterson more opportunities to show he’s still among the game’s best ball hawks.

It’s truly stunning to see just how dominant Lattimore was as a rookie for the Saints. Not only was he the primary reason this team’s defense took that next step, his ball-hawking ability was second to none in the NFC South. Relied on to shadow the opposing team’s No. 1 receiver, this former first-round pick recorded 18 passes defended and five interceptions en route to earning NFL Defensive Rookie of the Year honors.

Now that New Orleans added a reinforcement in the secondary in the form of Patrick Robinson, teams are not going to be able to avoid Lattimore moving forward. It’s in this that we expect to see a major uptick in takeaways from the cornerback and his now elite Saints defense in 2018. 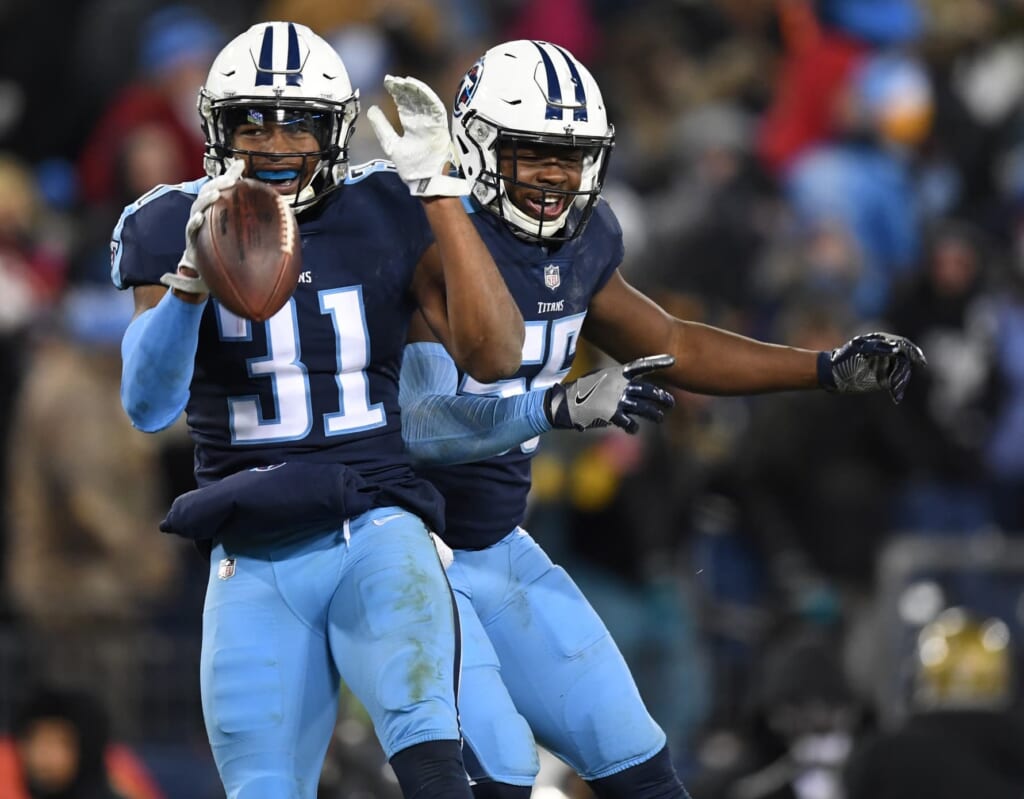 Coming completely out of nowhere as a third-round pick of the Titans back in 2016, Byard earned All-Pro honors in his first full season as the team’s starting free safety. He matched Darius Slay for the league lead in interceptions with eight while recording a whopping 16 passes defended. In the mold of Harrison Smith and Earl Thomas, Byard is now considered the next great true centerfielder in today’s NFL.

Consider this amazing stat. Byard recorded a combined 15 pass breakups and interceptions as a sophomore last season. It’s the first time in over a decade that this has been done in the NFL. In fact, Ed Reed and Troy Polamalu were the last two safeties to accomplish this feat all the way back in 2006.

Some will want to drop Sherman in these rankings simply because he’s coming off an Achilles injury during his last season in Seattle. Given that Sherman is already taking part in off-season workouts with his new 49ers team, that would be foolish. Let’s actually see him regress on the field before counting out one of the best cover corners to ever take to an NFL field.

Prior to missing all but nine games to injury last season, the 30-year-old Sherman had legitimately been the best ball-hawking cornerback in the league. From 2011-16, he recorded a combined 97 passes defended and 30 interceptions. During this span, Sherman yielded a sub 65 quarterback rating when targeted. If this transitions over to San Francisco, any thought given to Sherman’s demise will be thrown out the window. 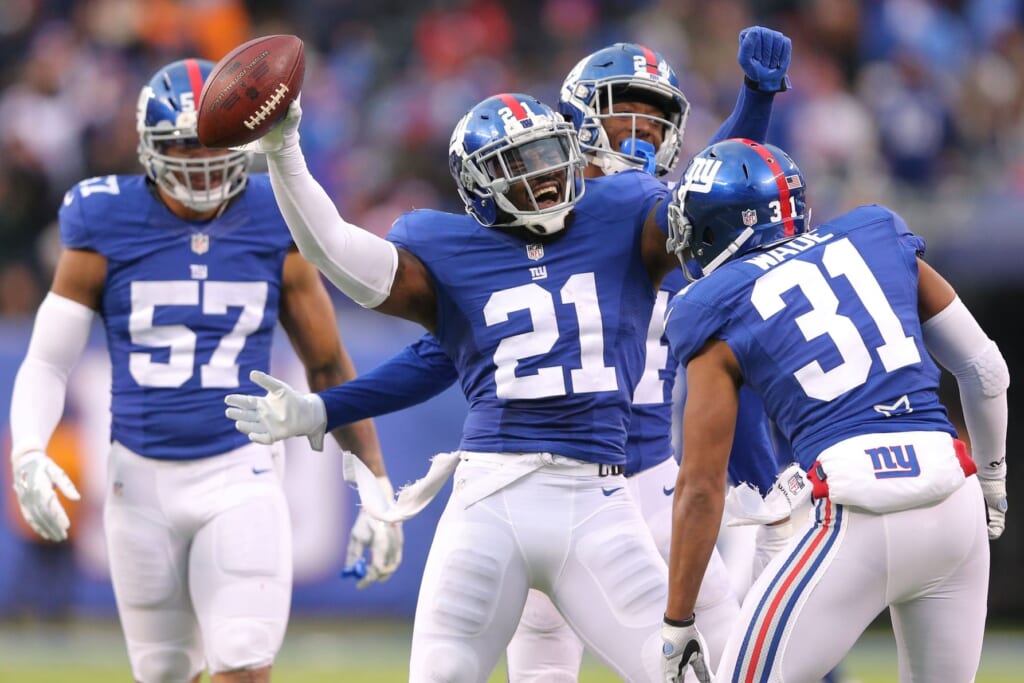 Much like the rest of his Giants team, Collins is coming off a frustrating 2017 season. Certainly, he still performed at a Pro Bowl level. In no way does that mean the former Alabama standout was anywhere near the ball hawk that we saw during a dominating sophomore campaign the year before.

Remember, Collins tallied 125 tackles (100 solo), 13 passes defended, five interceptions and a touchdown for the Giants in 2016. Should New York’s other defensive backs prove themselves worthy of seeing the field, there’s no reason to believe Collins can’t duplicate or surpass this performance after a one-year hiatus.

It was somewhat shocking to see Jacksonville hand Bouye a five-year, $67.5 million deal last offseason. After all, he had started a combined 19 games in four seasons with the division-rival Houston Texans. Even then, the Jaguars saw what we all saw on tape — Bouye had the ability to be a truly dominating cover guy.

That came to fruition in 26-year-old corner’s first season in Florida. Playing opposite Jalen Ramsey, he recorded 56 tackles, 18 passes defended and six interceptions. He also yielded a league low 31.6 passer rating when targeted. That’s just some insane stuff right there. And it has Bouye as one of the top corners in the game today. Period.

Much like former teammate Richard Sherman, Thomas has to prove that he can rebound from an injury. Unlike Sherman, this six-time Pro Bowler has proven in the past that he can do just that. Whether it’s with Seattle or another team this coming season, Thomas should be back up to his old tricks.

Here’s a guy that’s averaging north of three interceptions and eight-plus passes defended during his illustrious eight-year career. One of the first true centerfielders of the modern era, his impact is felt a lot more than just basic statistics. That’s what continues to make ET one of the best ball hawks in the game. 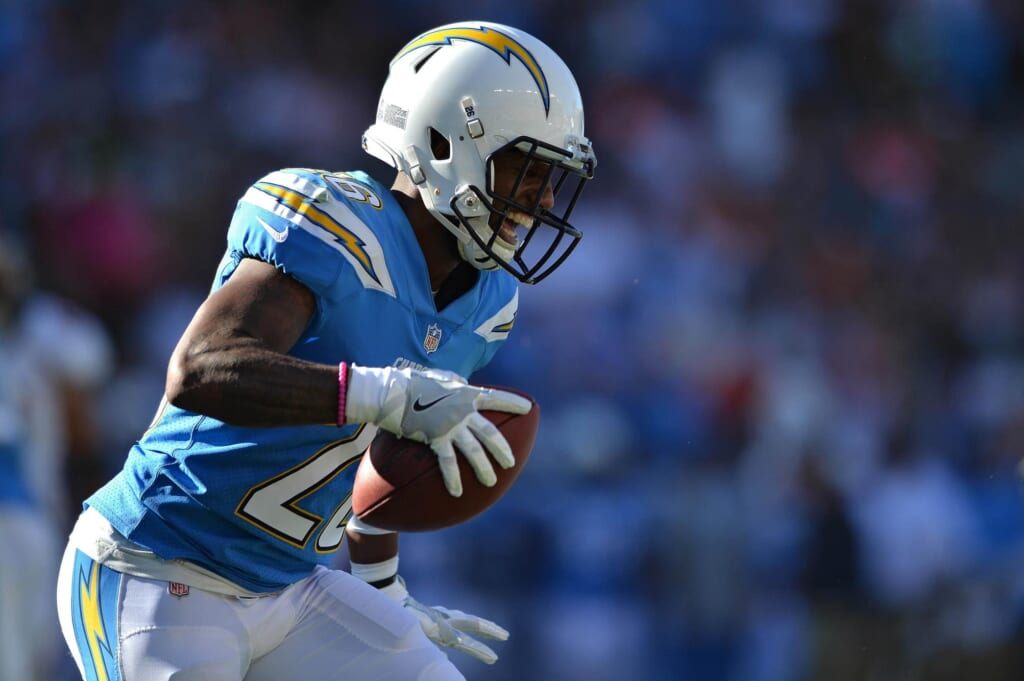 Potentially the most underrated player in the entire game, Pro Football Focus graded Hayward out as the best cover corner in the NFL last season. All said, he yielded a sub 40 passer rating when targeted while recording 22 passes defended and four interceptions. This came on the heels of a 2016 campaign in which Hayward put up 20 passes defended and a league high seven picks.

It goes without saying that Los Angeles jumped at the opportunity to reward Hayward with a lucrative contract extension earlier this offseason. More so than any other player at this position, Hayward has certainly proved himself to be worth the cash.

Joining forces with Marcus Peters in Southern California, Talib won’t be tasked with shadowing the opposing team’s No. 1 receiver like we saw in Denver. This should lead to more opportunities for a cornerback that has proven himself to have shut down capabilities.

Last season with the Broncos, the 33-year-old Talib recorded just seven passes defended and one interception. This was more indicative of quarterbacks avoiding him through the air. After all, the five-time Pro Bowler put up 18 interceptions in his previous four seasons.