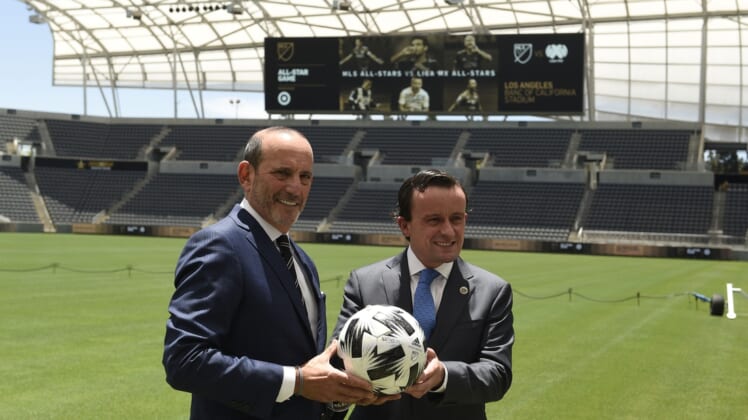 Major League Soccer announced Wednesday that its 2021 All-Star Game will feature the MLS All-Stars against the Liga MX All-Stars on Aug. 25 in Los Angeles.

The match, slated for Banc of California Stadium, will mark the first time the MLS and Liga All-Stars have squared off in the All-Star Game format.

“Fans have been looking forward to this historic matchup for more than a year, and we have no doubt the 2021 MLS All-Star Game … will prove to be worth the wait,” MLS commissioner Don Garber in a news release. “A game of this magnitude in Los Angeles, played in front of incredible fans in one of the greatest soccer stadiums in global soccer, is unlike anything our sport has seen.

“This event is a perfect expression of the groundbreaking partnership that continues to build between MLS and Liga MX.”

The MLS and Liga MX stars were slated to square off in last year’s All-Star Game on July 29, 2020, in Los Angeles, but the match was canceled due to the coronavirus pandemic.

The two leagues were diligent in terms of working together to get it done this year.

“The 2021 All-Star Game is another step in the partnership we have established between two of the best leagues in the world, and it will only intensify the rivalry between MLS and Liga MX, and is an important part of the internationalization project of our league to reach more audiences beyond Mexico. We are looking forward to playing for the supporters of Liga MX and giving soccer fans around the world a match they will never forget.”

The MLS All-Star Game will be in the Los Angeles area for the first time since 2003, when the currently named Dignity Health Sports Park in Carson, Calif., was the site. The Los Angeles Galaxy were the hosts for that game.

“This will be a special night of football in Los Angeles,” Bradley said in the news release. “It is always an honor to represent our city and our league on the international stage, and we look forward to competing against the Liga MX All-Stars.”