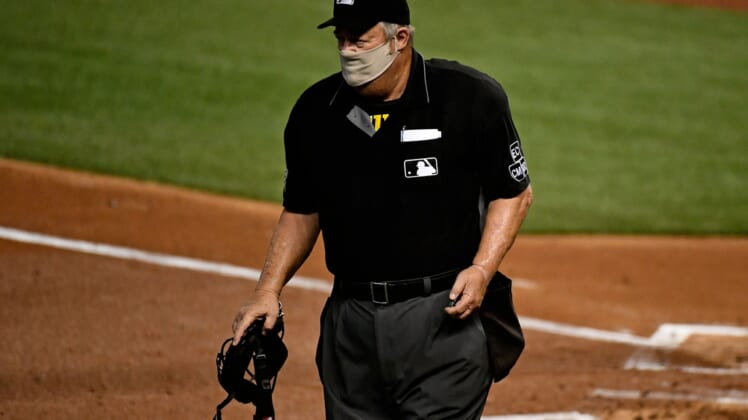 Lo Duca had said on “The Favorites” podcast on the Action Network in April 2019 that West had once agreed to give Lo Duca’s New York Mets teammate Billy Wagner a bigger strike zone in exchange for use of the pitcher’s vintage car.

“We’re playing like a really tight game against the Phillies and Billy Wagner comes in from the bullpen,” Lo Duca said on the podcast. “I used to go to the mound every time and like, ‘What’s going on?’ and he’s like, ‘Hey, Joe’s behind the plate. Set up a couple more inches inside. I was like, ‘Are you kidding me? Joe hates me.’ He’s like, ‘No, no, no, no, no, no. Joe loves me.’

“I go, ‘He hasn’t given us the corner all day.’ He’s like, ‘Don’t worry about it.’ He literally throws 10 pitches and strikes out three guys. Joe rings up all three guys. Eight out of the nine pitches were at least three to four inches inside, not even close. Guys were throwing bats and everything. Joe walks off the field …

“I get back into the clubhouse and I’m like, ‘What the (expletive) just happened just right now?’ And Wagner just winks at me. I’m like, ‘What’s the secret?’ He’s like, ‘Eh, Joe loves antique cars so every time he comes into town I lend him my ’57 Chevy so he can drive it around so then he opens up the strike zone for me.'”

West denied the allegation. According to USA Today, West was behind the plate only once for a Phillies-Mets game in 2006 and ’07, the seasons in which Lo Duca and Wagner were Mets teammates, and Wagner didn’t pitch in that game.

West also maintained that Lo Duca’s comments could hurt his chances of making the Hall of Fame.

The court awarded West $250,000 for “past mental anguish and emotional distress” and another $250,000 to “compensate for expenses he will need to incur in retaining a public relations firm to formulate and operationalize a sufficient reputation remediation plan.”

West’s lawyer, Kevin Murphy, said in a statement Monday, “Joe is very pleased with this result and we are glad that Mr. Lo Duca is being held accountable for his actions. As the most senior Major League umpire, Mr. West looks forward to focusing on the 2021 baseball season and breaking the record for the most games ever umpired by anyone in the history of Major League Baseball.”