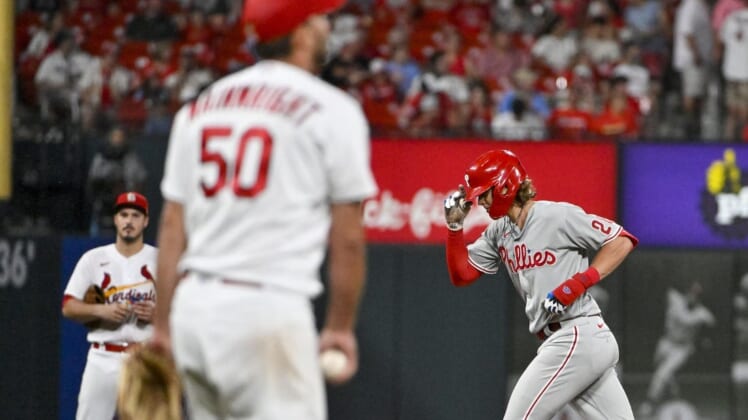 Wheeler (8-4) allowed five hits and a walk while striking out five batters as the Phillies won for the sixth time in their last eight games. This was the sixth time this season Wheeler didn’t allow a run. He has thrown 14 scoreless innings against the Cardinals this season.

Bohm led off the sixth inning with a homer over the center field wall, and he hit his sixth of the season with two outs in the eighth. Seranthony Dominguez dispatched the Cardinals in the eighth and Brad Hand closed out the ninth inning to earn his fourth save.

Cardinals starting pitcher Adam Wainwright (6-7) threw a complete game while allowing the two runs on five hits and no walks. But the slumping Cardinals lost for the seventh time in their last nine games.

Trey Mancini capped a three-run ninth inning when he singled home Cedric Mullins with the winning run as Baltimore rallied past visiting Los Angeles for its sixth straight win.

Mullins and Mancini each had two hits for the Orioles. Dillon Tate (1-3) pitched one inning for the victory.

Mike Trout and Shohei Ohtani each had three hits, including a homer, but the Angels lost for the sixth time in seven games. Raisel Iglesias (2-5) yielded all three runs in the ninth after taking over with a two-run lead.

Mookie Betts had a game-tying sacrifice fly in the ninth inning and Will Smith hit a game-ending RBI single in the 10th as host Los Angeles increased its head-to-head winning streak over Chicago Cubs to eight games by rallying from a 3-0 deficit.

Smith’s hit to left field against Cubs right-hander Rowan Wick (1-4) scored free runner Trea Turner from second base as the Dodgers improved to 8-1 on a season-high, 11-game homestand, their final one before playing host to the All-Star Game later this month.

Jake Lamb hit his first home run with the Dodgers, who stormed back after trailing 3-0 in the sixth inning. Nico Hoerner hit a home run for the Cubs and Ian Happ added a two-run double as Chicago fell to 0-5 against the Dodgers this season.

Kris Bryant smashed two homers and a long double and Colorado survived the loss of two key players while notching a victory over Arizona in Phoenix.

The Rockies lost first baseman C.J. Cron in the fifth inning with a left wrist contusion after he was hit by a pitch. Shortstop Jose Iglesias left an inning later with an apparent head injury after being involved in a collision at home plate.

Sergio Alcantara hit a two-run homer and Josh Rojas added a solo shot for the Diamondbacks, who dropped their third straight game.

It was the Padres’ fifth straight win over the Giants, who have lost eight of their past nine games overall and are 4-14 over their past 18 games. Snell (1-5) entered the game with a 5.13 ERA and the Padres were 1-8 in his starts this year, but he held the Giants to one run on three hits and two walks.

Former starting pitcher Nick Martinez picked up his third save, giving up two runs on two hits and two walks with three strikeouts in three innings. The Padres led 3-0 before Giants opener Sam Long (0-2) retired a hitter in the first inning thanks to a single, a double and then Machado’s 14th homer of the season.

Reliever Matt Wisler balked in free runner Mark Kolozsvary with the winning run in the bottom of the 10th inning to give Cincinnati a win over visiting Tampa Bay.

Wisler (2-3) was facing pinch-hitter Tyler Naquin with runners on first and third when Wisler appeared to flip his glove to his catcher to ask for new signs when home plate umpire Edwin Moscoso immediately jumped from behind the plate and called the balk and pointed Kolozsvary home.

It was the third walk-off win in seven games for the Reds, who had none before last Sunday’s win over Atlanta.

Pablo Lopez (6-4) worked in and out of trouble over five innings in earning the win for the Marlins, who snapped a two-game losing streak and improved to 7-2 in their past nine games.

The Mets have won four of their past six. The teams have split the first two games of a four-game series.

Josh Donaldson homered for the third time in as many games and Matt Carpenter added a solo shot to lift visiting New York to a victory over Boston.

Donaldson belted a three-run homer in the first inning, and Carpenter and Gleyber Torres each had three hits and drove in two runs. Joey Gallo added a two-run triple in the third inning for the Yankees, who have scored 34 runs during their three-game winning streak.

Miguel Castro (5-0) allowed one hit and struck out three batters in 1 1/3 scoreless innings to pick up the win in relief of Nestor Cortes.

Ronald Acuna Jr. ended his home run slump with a three-run shot and helped Atlanta roll to a win over visiting Washington.
Acuna had not homered since June 21 and was mired in an 0-for-14 slump until driving a pitch from Erick Fedde an estimated 446 feet into the left-field seats in the second inning. He went 2-for-5, and his eighth homer — one of four hit by the Braves — was part of a five-run rally and led Atlanta to its eighth win in 11 games.

The Braves got 15 hits — including a 4-for-4 performance from Michael Harris II with a double, four RBIs and his seventh home run, and a 3-for-5 night by Dansby Swanson. The Braves are 27-8 since June 1.

Seager’s blast off Twins right-hander Sonny Gray (4-2) snapped a 3-3 tie. Jon Gray (5-4) picked up the win after allowing five runs (three earned) on nine hits and one walk. He fanned eight. Brett Martin tossed a perfect ninth inning for his first career save.

Carlos Correa and Ryan Jeffers homered for the Twins, and Sonny Gray was charged with five runs on four hits and two walks in 4 2/3 innings. He didn’t record a strikeout.

Michael A. Taylor lined a one-out single to right, driving in Edward Olivares with the winning run in the bottom of the ninth inning as Kansas City walked off visiting Cleveland in the first game of a three-game series.

The Guardians lost their fifth straight and their 13th in their last 17 games.

Milwaukee closer Josh Hader worked out of a ninth-inning jam when visiting Pittsburgh had the potential tying run cut down at home plate for the final out, preserving the Brewers’ victory.

Hader, who had given up the go-ahead run in his last two outings, walked Diego Castillo to open the ninth. Castillo advanced on a one-out wild pitch and took third on Kevin Newman’s single. Oneil Cruz struck out, but Daniel Vogelbach punched a single to right-center, scoring Castillo.

Newman continued around third but was thrown out on the relay from right fielder Andrew McCutchen to shortstop Adames to catch Victor Caratini.

Jeimer Candelario homered and drove in three runs as Detroit extended its winning streak to a season-best six games by beating host Chicago.

Luis Robert homered among his two hits for Chicago, which has lost four of five overall and eight of 10 at home. Jose Abreu went 2-for-5 to extend his hitting streak to 13 games.

Trailing 7-5 in the ninth, the White Sox had runners at the corners with one out, but Michael Fulmer struck out Robert and retired Abreu on a fly ball to deep right field for his second save. Detroit starter Tarik Skubal (6-7) allowed two runs on six hits with one walk and seven strikeouts over six innings.

Right-hander Jose Urquidy ran his unbeaten streak to five games thanks in large part to the support of home runs from Alex Bregman and Martin Maldonado as Houston opened a three-game road series with a romp over Oakland.

After learning that he was denied a starting spot in fan balloting for the All-Star Game, American League Most Valuable Player candidate Yordan Alvarez contributed a double, walk, RBI and two runs to Houston’s fourth straight win in Oakland this season.

Urquidy (8-3), who was just 5-3 with a 5.04 ERA after a loss to the Seattle Mariners on June 8, limited the A’s to three runs and four hits in a season-best eight innings to lower his ERA to 4.08. He walked one and struck out two.