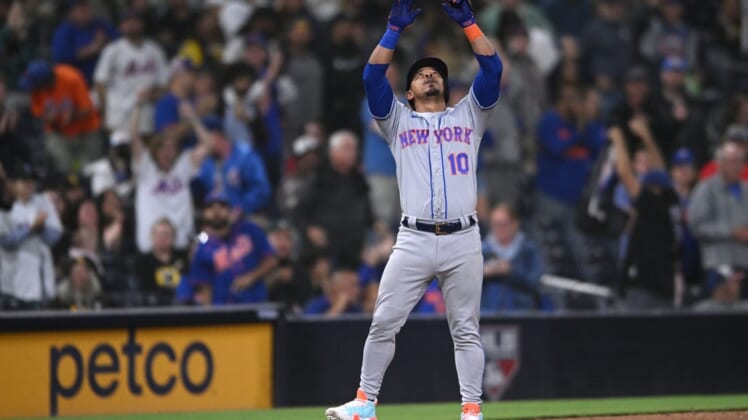 Escobar finished 4-for-5. His single, homer and triple drove in two runs apiece. Escobar logged the 11th cycle in Mets history but the first since Scott Hairston accomplished the feat in 2012. The third baseman capped a three-run Mets first with a two-run single against Padres starter Blake Snell (0-3).

Escobar doubled and scored in the fourth, popped out in the fifth, then hit a two-run homer to right off Padres reliever Craig Stammen in the eighth. An inning later, he hit a two-run triple off the angled wall in right at Petco Park off Tim Hill, igniting a four-run inning that put the game away. The cycle was also the first ever at Petco Park, which opened in 2004.

Carrasco (7-1) won his sixth straight decision in the first appearance of his 266-game career against the Padres.

Michael Wacha threw a three-hit shutout to lift Boston past Los Angeles in Anaheim, Calif., sending the Angels to their 12th consecutive loss, one off the franchise record.

Wacha recorded just his second career complete game. His previous one, also a three-hit shutout, came against the New York Mets when he pitched for the St. Louis Cardinals on July 18, 2017. Wacha (4-1) struck out six and walked one while making 105 pitches.

The Red Sox scored the only run of the game against Angels starter Noah Syndergaard (4-4) in the second inning. Alex Verdugo hit a leadoff single and scored from first on Christian Vazquez’s two-out double. Syndergaard gave up one run on five hits and one walk while striking out three in six innings.

Rookie Hunter Greene was nearly perfect, allowing only a leadoff bunt single over seven shutout innings as Cincinnati blanked visiting Arizona in a game that was halted in the bottom of the seventh inning due to rain.

Kyle Farmer and Tyler Stephenson each had two hits and two RBIs and Brandon Drury had two hits, including his team-leading 10th homer, as the Reds snapped a three-game losing streak.

Greene (3-7) struck out eight and walked none for the second straight start. Madison Bumgarner (2-5) gave up four runs on eight hits in five innings as the Diamondbacks lost their third game in a row.

Cal Raleigh produced his third multi-hit game of the year and drove in a career-high four runs as visiting Seattle beat Houston.

Raleigh smacked a three-run homer in the second inning and added a run-scoring single in the fourth to pace the Mariners, who entered Monday having won three consecutive series. Raleigh, batting in the No. 9 spot, finished 2-for-4 for his second multi-hit game of the current road trip.

Astros starter Cristian Javier (3-3) struggled throughout his abbreviated start. He allowed five runs on six hits and one walk with four strikeouts over 3 2/3 innings.

The start of the game was delayed 2 hours, 5 minutes due to the weather, even though there was only a light rain. Heavy thunderstorms were predicted. The Royals managed just two hits, both by Michael A. Taylor.

Ross Stripling (2-1) picked up the win. In five innings, he allowed just one hit and no walks while striking out two. Daniel Lynch (2-5) took the loss after giving up six runs on six hits in 5 2/3 innings. He walked two and struck out four. He gave up all three of Toronto’s homers.