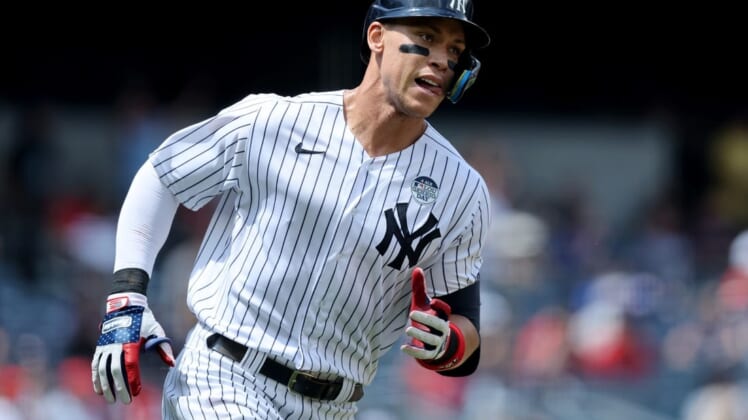 Jameson Taillon took a perfect game into the eighth inning and pinch hitter Anthony Rizzo hit a two-run single in the bottom of the eighth as the New York Yankees earned a 2-1 win over the visiting Los Angeles Angels on Thursday, completing a doubleheader sweep.

Taillon (6-1) lost his bid for the 24th perfect game in baseball history when Jared Walsh hit an 0-2 curveball up the middle leading off the eighth. Walsh came around to score on Kurt Suzuki’s two-out single to left.

In the bottom of the inning, Miguel Andujar doubled and Isiah Kiner-Falefa and Aaron Hicks walked. Rizzo put the Yankees in front when he grounded a fastball up the middle.

Taillon allowed one run on two hits in eight innings. He struck out five, walked none and threw 64 of 101 pitches for strikes. Clay Holmes escaped a bases-loaded, two-out jam in the ninth for his seventh save.

Before heavy rain resulted in an 88-minute delay after the eighth, Cortes (5-1) held the Angels to five hits and lowered the AL’s second-best ERA to 1.50. The left-hander struck out seven, walked two and posted his 19th straight outing of allowing three runs or fewer.

Judge hit his latest homer in the third inning, after Matt Carpenter capped an 11-pitch at-bat with a 410-foot homer into the second deck to open the game. Gleyber Torres also homered in the first and DJ LeMahieu connected in the fifth. Ohtani (3-4) lasted three-plus innings and allowed four runs on eight hits.

Eric Haase smacked a one-out single off Emilio Pagan (1-2) in the eighth inning before Cameron drilled a 1-0 cutter over the left-center-field wall for his first homer of the year. Alex Lange (3-1) picked up the victory with one inning of scoreless relief, and Gregory Soto notched his 10th save by recording the last three outs.

Nick Gordon had two hits, a run scored and an RBI for Minnesota, which had been shut out the previous two games.

Tampa Bay has struggled to score recently, but Corey Kluber didn’t require much support against Texas in Arlington as the Rays salvaged a four-game series split after dropping the first two games.

The last time Kluber (2-2) faced the Rangers in Arlington — on May 19, 2021 — he threw a no-hitter for the New York Yankees. On Thursday, the right-hander gave up one run in six innings, with four strikeouts.

Rangers starter Taylor Hearn (3-4) ran up a high pitch count and was replaced after four innings. The left-hander was charged with three runs on six hits and was finished after 89 pitches. Marcus Semien homered for Texas.

Chicago scored three runs in the eighth, but Toronto responded with four runs in the bottom of the inning. Teoscar Hernandez led off with a ground-rule double against Reynaldo Lopez. Alejandro Kirk walked and Cavan Biggio hit an RBI double. After Matt Chapman was hit by a pitch, Aaron Bummer replaced Lopez and got two outs before allowing Santiago Espinal’s two-run single. Jimmy Lambert then gave up Bo Bichette’s RBI single.

Matt Reynolds also connected for his first home run in the majors in over five years. Four batters had two hits apiece for the Reds, who opened their eight-game homestand with a win and have won six of eight.

Ashcraft (2-0) continued his impressive rookie season. The right-hander extended his scoreless streak to 12 2/3 innings before allowing a home run in the seventh against Josh Bell. The homer ended Washington’s scoreless drought at 27 innings, but the Nationals have lost their last four games by a combined 36-6 score.

Alcantara (6-2) allowed just three hits — one double and two singles — and a pair of walks, striking out eight and throwing 111 pitches. He has won four straight starts, throwing at least 100 pitches in each, and he lowered his ERA to 1.81. Jacob Stallings, Jesus Aguilar and Miguel Rojas had RBIs for Miami.