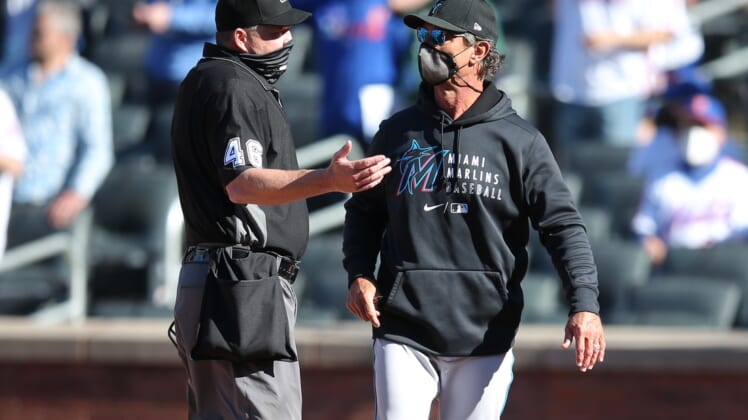 Michael Conforto drew a hit by pitch with the bases loaded Thursday afternoon to cap a two-run ninth inning comeback by the New York Mets, who won their home opener by edging the Miami Marlins 3-2.

Plate umpire Ron Kulpa later admitted that he erred in his call that gave the Mets the walk-off victory. In the bottom of the ninth with the game tied 2-2, Kulpa began to call Conforto out on strikes but instead awarded him first base after ruling the ball grazed Conforto’s arm on a pitch from the Marlins’ Anthony Bass. The Marlins argued the call, but to no avail.

Corey Dickerson and Jesus Aguilar had RBI hits in the sixth for the Marlins off Mets starter Taijuan Walker. Dickerson finished 2-for-4.

Lance Lynn hurled a complete game, the first in the majors this season, and notched his second career shutout as Chicago won its home opener at the expense of Kansas City.

Lynn (1-0) has yet to allow an earned run in two starts, covering 13 2/3 innings. He allowed five singles with 11 strikeouts and no walks vs. the Royals. Only two Kansas City runners reached second base.

David Fletcher hit a two-run single with two outs in the 11th inning to give Los Angeles a victory in Toronto’s home opener at Dunedin, Fla.

Fletcher had three RBIs, and Mike Trout hit a solo home run for the Angels. Junior Guerra (2-0) pitched a perfect bottom of the 10th to get the win. Raisel Iglesias struck out the side in the bottom of the 11th to earn his second save.

Vladimir Guerrero Jr. had a home run and three RBIs and Cavan Biggio hit a solo home run for the Blue Jays.

Mitch Garver, Byron Buxton and Luis Arraez homered as Minnesota pounded out 16 hits in a victory over Seattle in its home opener at Minneapolis.

Buxton also doubled and singled, and Garver added a double while driving in three runs. Arraez contributed three RBIs, and Andrelton Simmons went 3-for-5 with two doubles for Minnesota, which won its second consecutive game. Jose Berrios (2-0) gave up two runs in 5 2/3 innings.

Kris Bryant, Anthony Rizzo and Javier Baez each homered and had two hits to break Chicago out of its early hitting slump in a victory over host Pittsburgh.

The Cubs, who had only 21 hits in their first six games, collected 11 on Thursday to back up another solid start from Jake Arrieta. The right-hander picked up his second win in as many starts to begin his return stint with Chicago. Both victories have come against the Pirates.

Orioles starter Matt Harvey (0-1) was charged with four earned runs on seven hits in five-plus innings. Harvey was pulled in the sixth after Rafael Devers and Christian Vazquez (3-for-5, run) led off with singles.

Boston ended up scoring twice in the inning — one off a groundout by Christian Arroyo and another off a Franchy Cordero single — to take the lead. The Red Sox added two runs in the seventh and another in the eighth on a home run from Enrique Hernandez.

Trevor Story and Charlie Blackmon had two hits apiece for the Rockies, and Daniel Bard got the last two outs for his second save.

David Peralta had a triple to break up the no-hitter, Eduardo Escobar homered and Pavin Smith had two hits for the Diamondbacks.

In his first home opener for St. Louis, Nolan Arenado hit the game-winning, two-run home run to deliver a victory over Milwaukee.

Adam Wainwright made his sixth home-opening start for the Cardinals, tying Bob Gibson for the team record. He struck out six batters and allowed one earned run in five innings. Brewers starter Corbin Burnes struck out nine batters in six shutout innings.

Carlos Correa and Yordan Alvarez homered and had multi-hit games as Houston bashed its way to a victory in its home opener against Oakland.

Jose Altuve also went deep for the Astros, crushing a 426-foot shot to left-center field leading off the seventh inning to cap the barrage. Houston leads the majors with 15 home runs. The Astros have beaten the Athletics in all five of their meetings, outscoring them 41-11.