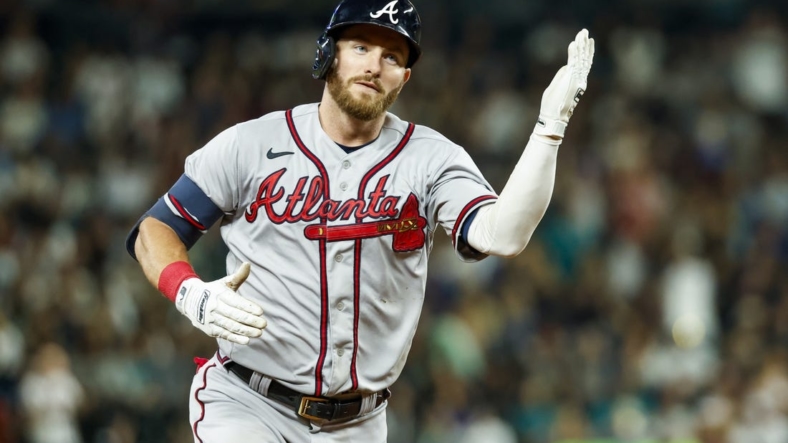 The result allowed the Braves (87-51) to take sole possession of first place in the National League East for the first time all year. Atlanta moved past the New York Mets (87-52) by a half-game after trailing by 10 1/2 games at the start of June and by seven games through Aug. 10.

Carlos Santana homered twice and J.P. Crawford also went deep for Seattle, which lost its second in a row and dropped into the American League’s third wild-card position. The Mariners (77-61) still have a four-game lead over the Baltimore Orioles (73-65) for the league’s last playoff berth.

Atlanta starter Charlie Morton (8-5) got the victory. The right-hander gave up four runs on six hits in 6 1/3 innings, with two walks and five strikeouts. Mariners left-hander Robbie Ray (12-9) allowed more runs (four) than he had in total while winning each of his previous four starts (three).

Elias Diaz hit two home runs, including a game-ender, and drove in seven runs, C.J. Cron hit a 504-foot homer, the longest in the majors this season, as Colorado beat Arizona in Denver.

Jake McCarthy homered among his three hits, Daulton Varsho hit a grand slam and Corbin Carroll also went deep for the Diamondbacks, who have lost three in a row. A nine-run fifth inning wasn’t enough for Arizona.

The Cubs did just enough against Carlos Rodon (12-8), who fanned 11 over 5 1/3 innings to become the first Giant with 10 games of at least 10 strikeouts in one season. Rodon yielded Gomes’ two-run blast in the second and just two other hits.

Smyly (6-8) was slightly better, giving up only David Villar’s double in the second inning. The left-hander also walked two and struck out eight, before exiting with a 4-0 lead after Austin Dean reached on an error with nobody out in the eighth.

Garrett Cooper went 3-for-3 with a two-run homer and a walk as host Miami knocked off New York.

Miami, which also got a two-run homer from rookie Charles Leblanc, won its second straight game in its role as spoiler. David Peterson (7-4) took the loss, allowing five hits, two walks and three runs with seven strikeouts in 3 2/3 innings.

Astros starter Lance McCullers Jr. (3-1) got the win after going seven innings and allowing two runs on four hits and one walk while striking out six and making a season-high 105 pitches.

The Angels bullpen surrendered the lead in the seventh when Andrew Wantz (2-1) gave up a leadoff single to Trey Mancini before McCormick’s two-run homer put Houston in front 3-2.

Ben Gamel added a solo homer, Michael Chavis hit a two-run triple and Bryan Reynolds and Cal Mitchell each had an RBI single for the Pirates, who had lost two straight and six of seven. The Pirates’ 15 hits were one shy of a season high.

Tommy Edman hit an RBI double for the Cardinals, who have lost two in a row.

Gunnar Henderson’s two-run single in the sixth inning lifted Baltimore past Boston. He added a double as Baltimore rallied from a two-run deficit.

Bichette finished with three RBIs in the opener of the three-game series as the Blue Jays improved to 7-1 with two games left on a 10-game road trip.

The Rangers have lost 11 of 12. Texas third baseman Josh Jung hit a solo home run in his first major league plate appearance. He also had a single and a stolen base.

Wander Franco had three hits and two RBIs in his return from the injured list and visiting Tampa Bay capitalized on a pair of defensive miscues by Aaron Hicks en route to a victory over New York.

Franco had been out for two months due to surgery to repair his right hamate bone. One of his hits was a two-run double off Frankie Montas (5-12) that Hicks misplayed to give Tampa Bay a 3-0 lead in the fourth inning.

With two outs, Franco hit a fly ball that hooked toward the foul line. The ball popped in and out Hicks’ glove, allowing Ji-Man Choi to score, and Yandy Diaz also came home when Hicks crashed into the side wall and appeared to be unable to briefly locate the ball.

Jake Cronenworth hit a game-ending single with one out in the 10th inning to give San Diego a win over visiting Los Angeles.

The Padres moved into the second National League wild-card slot, a half-game ahead of the Philadelphia Phillies. Left-hander Adrian Morejon (4-0) retired the first three hitters in the Dodgers’ batting order in the top of the 10th, stranding the automatic runner at second.

Heath Hembree (3-1) opened the bottom of the 10th for the Dodgers. He started by intentionally walking Manny Machado before striking out Josh Bell. Cronenworth then lined a single to right, with automatic runner Juan Soto easily beating a wide throw by Mookie Betts to the plate.

After Pruitt threw five no-hit innings and Tony Kemp had a hand in three runs, the A’s took a 3-0 lead into the ninth. However, the American League Central-contending White Sox rallied against Oakland’s fourth pitcher, A.J. Puk (3-2).

Eloy Jimenez’s one-out solo homer, his 12th, combined with two-out RBI singles by Andrew Vaughn and Romy Gonzalez to draw the White Sox even, setting the stage for Andrus, who was released by the A’s last month.

Oscar Gonzalez went 4-for-5 with two home runs and five RBIs to lead Cleveland to a victory over Minnesota in Minneapolis.

It was the first career multi-homer game for the rookie, who had hit just five major league home runs entering the contest. Austin Hedges also homered and had two hits for the Guardians, who jumped out to a 7-0 lead and then had to hold on for their third win in the past nine games.

Carlos Correa went 4-for-5 with a homer and four RBIs, Jose Miranda had two doubles and a single and Gio Urshela also had three hits for Minnesota. Dylan Bundy (8-7) gave up seven runs on a career-high 12 hits over 4 2/3 innings.

Rookie starter Nick Lodolo (4-5) set career highs by striking out 11 over eight innings. He allowed two runs on five hits — including a two-run homer by Tyrone Taylor in the third inning — and walked none in winning for the first time since July 25.

The Reds gave Lodolo all the support he needed and then some by going ahead 4-0 before Jason Alexander (2-3) recorded the game’s first out. Alexander recovered from the rough start to last 5 1/3 innings. The rookie right-hander gave up nine hits and one walk while striking out four.

Jeimer Candelario finished a triple short of the cycle for the Tigers. Wentz (1-1), making his first appearance for the Tigers since May 31, allowed no runs on two hits in 6 2/3 innings.