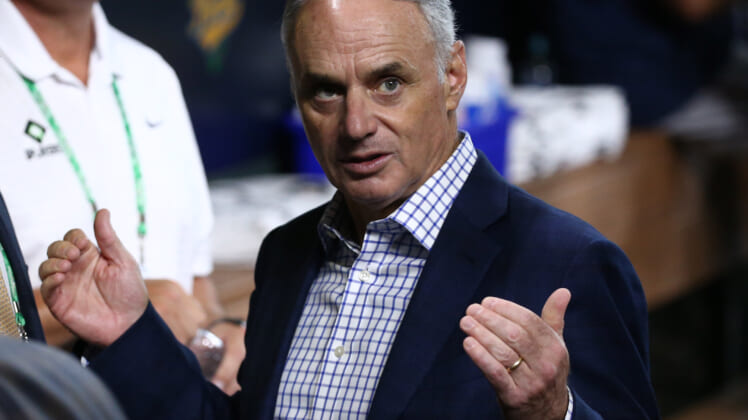 Major League Baseball commissioner Rob Manfred finds himself under scrutiny often, widely viewed as the worst commissioner in American sports. Serving in his role as the protective shield for MLB owners, MLB is compensating Manfred quite well.

While Manfred isn’t the highest-paid commissioner in sports, coming in far behind Roger Goodell, he also has made several public mistakes in recent years. Already under scrutiny from MLB players for giving Houston Astros players immunity to cooperate in the sign-stealing investigation, Manfred downplayed the importance of the World Series trophy.

When asked to respond to complaints from players about the Astros getting to keep their World Series title despite blatant cheating, Manfred delivered a line that tarnished his reputation with players.

While Manfred later apologized for the remark, the MLB commissioner did very little to repair his reputation with the MLB Players Association. The 63-year-old’s image took another devastating blow on March 1 when he immediately smiled at a press conference after announcing the cancelation of games for the start of the 2022 season.

Despite Manfred’s repeated blunders when representing the sport, baseball remains incredibly profitable. MLB reported record-setting revenue every year before the COVID-19 pandemic. After taking a hit during the COVID-shortened year, it rebounded in 2021. With new TV deals being signed and more sources of income coming in, Manfred is making more than he ever did before.

It’s a massive spike from the $11 million salary the Washington Post reported in October 2020. With bonuses tied to yearly MLB revenue, it’s also no surprise that Manfred is surpassing $25 million per season in some years.

Just months after MLB owners talked about how there isn’t that much money in baseball and teams, it’s clear based on Manfred’s salary and the rising franchise values that MLB is doing just fine.