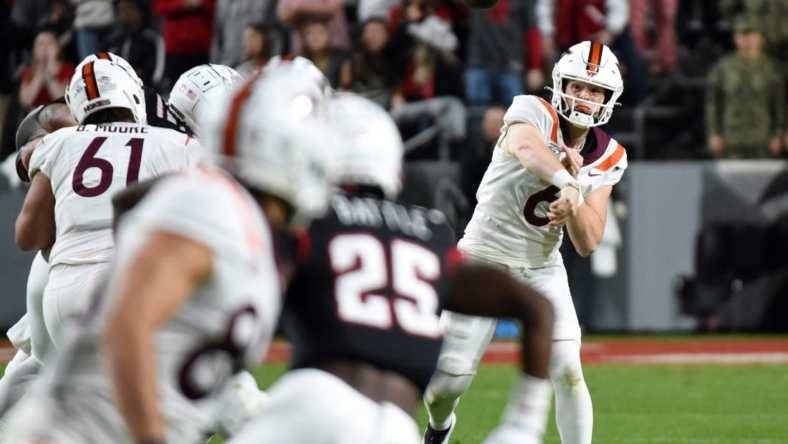 The Wolfpack trailed by 18 points late in the third quarter before cranking up their offense. Two of the touchdown passes went to Thayer Thomas, including a go-ahead play with 7:38 remaining.

NC State (6-2, 2-2 Atlantic Coast Conference) was in danger of losing its second game in a row.

Morris replaced Jack Chambers, who was making his second start since a season-ending injury to ACC Preseason Player of the Year Devin Leary. Morris went 20-for-29 for 265 yards.

Virginia Tech quarterback Grant Wells ran for two touchdowns and threw for another – all in the third quarter – as the Hokies (2-6, 1-4) bolted to a 21-3 lead.

Wells ran for a 4-yard touchdown and then threw to Kaleb Smith on an 85-yard touchdown play. The Hokies made it three touchdowns in less than nine minutes when Wells ran in from 20 yards out with 4:02 to play in the third quarter.

The Wolfpack punted to end its first three possessions of the second half before scoring touchdowns on its next three drives.

The winning points came when Morris flicked a short pass to Thomas, who found a crease between blockers in the middle of the field to complete an 18-yard play. Thomas finished with 10 catches for 118 yards.

Wells ended up 11-for-22 for 243 passing yards, with Smith making three receptions for 141 yards. The Hokies managed only 50 yards on the ground.
Virginia Tech was hurt by 13 penalties.

There was no scoring until Christopher Dunn’s 35-yard field goal with five seconds left in the first half put NC State on the board.

Wolfpack running back Demi Sumo-Karngbaye, who had been the team’s leading rusher in mid-October, missed his second game in a row with an injury.