Mississippi St. QB Will Rogers carves up Arizona in rout 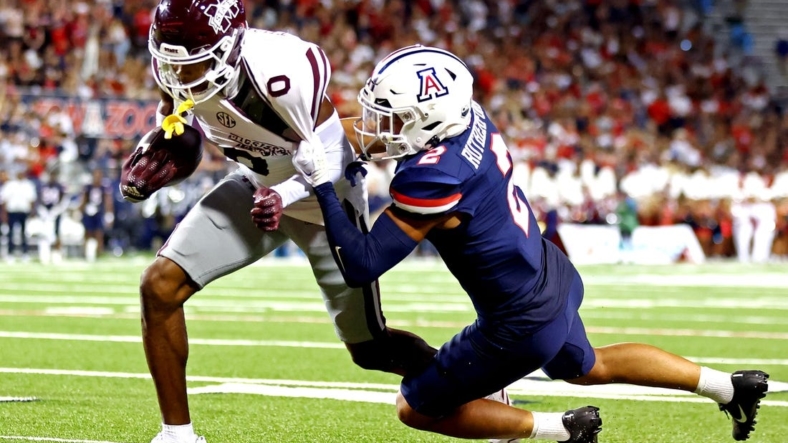 Mississippi State (2-0) twice stopped Arizona on fourth down in Bulldogs’ territory in the fourth quarter while protecting a 15-point lead. MSU sealed the victory with a 2-yard touchdown pass from Rogers to Caleb Ducking with 3:18 to go.

Arizona (1-1) struggled offensively. Quarterback Jayden de Laura completed 23 of 45 passes for 220 yards, with one touchdown and three interceptions. The Wildcats rushed for only 40 yards, including Michael Wiley’s 34-yard scoring run on the game’s first drive.

Rogers was content to efficiently work the short passing game, completing 39 of 49 throws, with none going longer than 20 yards. He was intercepted once.

Mississippi State, which led 18-10 at halftime, marched 75 yards on the opening drive of the second half, capped by a 5-yard touchdown pass to Austin Williams.

After de Laura threw his second interception on the ensuing possession, Arizona got back in the game when Jaxen Turner stripped the ball from receiver Jamire Calvin, recovering it and returning it 47 yards to the 4. The Wildcats scored two plays later on a 2-yard pass to Jacob Cowing to make it 25-17 with 7:37 left in the third quarter.

Mississippi State turned momentum back in its favor late in the quarter. Tyrus Wheat deflected a pass at the line of the scrimmage that Nathaniel Watson intercepted and returned 51 yards to the Arizona 11.

The Bulldogs then gambled on fourth-and-3, with Rogers hitting Williams on a quick slant for a TD with 14:17 to go in the game.

Mississippi State scored touchdowns on its first two possessions, but Massimo Biscardi missed the PAT after both scores. Backup kicker Ben Raybon came on to hit a 39-yard field goal for a 15-7 lead late in the first quarter and connected from 22 yards with 33 seconds left before halftime to make it 18-10.