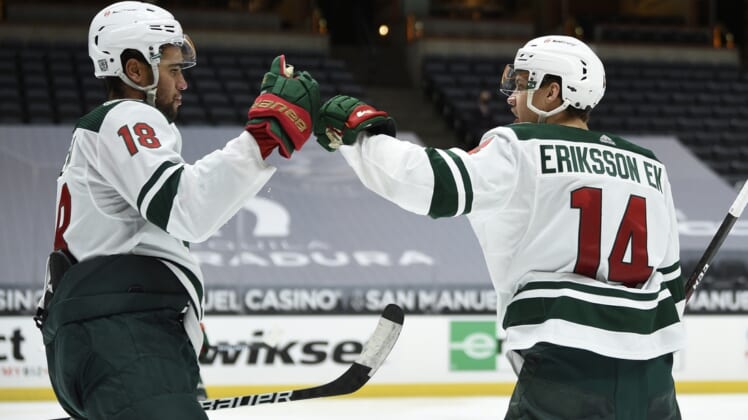 The San Jose Sharks are flying high after a hard-fought shootout victory over the St. Louis Blues on Wednesday. Now they must put the lessons they’ve learned to the test as they travel to St. Paul, Minn., to battle the Wild.

San Jose’s 2-1 shootout win on Wednesday featured tight defensive play and a strong push late in the game to keep St. Louis from running away with the two-game series — not to mention a strong comeback performance from netminder Martin Jones, who had been pulled from his previous start.

Sharks head coach Bob Boughner has yet to announce who his starting goalie will be for Friday’s tilt with the Wild. Although it wouldn’t be surprising if Jones got a second consecutive start between the pipes after posting 22 saves against the gritty St. Louis squad.

In addition to getting a solid performance from Jones, the Sharks also got contributions from their bottom six forwards, including the lone regulation goal from Marcus Sorensen.

“I believe the third and fourth lines created some of our best (offensive) zone shifts tonight when we needed it just at the right time,” Boughner said. “They jumped over the board and played a little bit of a blue-collar style game, which was perfect for us.”

That perfect style could come in handy against the Wild, who have won three of their first four games — all on the road, including a 3-2 victory over the Anaheim Ducks on Wednesday. Friday marks the beginning of a six-game homestand for the Wild.

“We have been working really hard in practice and it showed out there today,” Minnesota center Joel Eriksson Ek told the media after the win. “We’re structured, we’re staying the course. That’s why we are doing really well right now.”

“It’s nice to reinforce what we’re doing,” said Evason. “There’s reinforcement of adverse situations and negativity in some spots too, and we’ll teach off of both as a staff. It’s just nice to get rewarded and feel good and hopefully carry that momentum forward.”

Special teams will certainly be a focal point when San Jose visits Minnesota on Friday. The Sharks’ power play, which was red-hot to kick off the season, went 0-for-7 on Wednesday, dropping the club to a 27.8 percent success rating.

While San Jose still looked dangerous on the man advantage, they will have to execute better against the Wild’s penalty kill, which enters Friday’s contest with a 92.3 percent success rating. Likewise, Minnesota’s power play, which is one of the worst in the league, will have its work cut out against San Jose’s stealthy kill unit, which blanked St. Louis’ power play in two straight games.