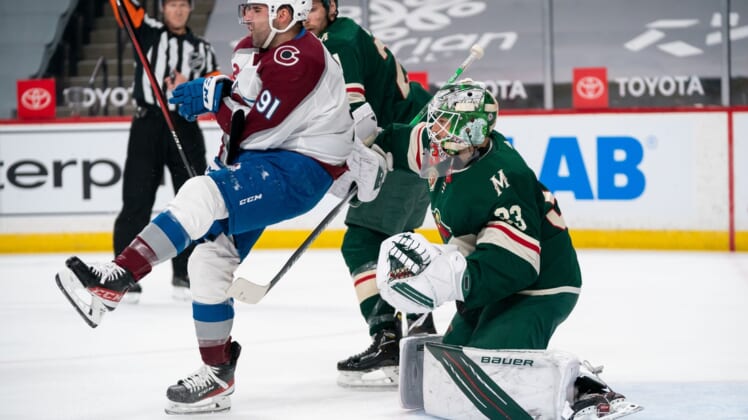 Kevin Fiala scored his first career hat trick and also had an assist as the Minnesota Wild snapped Colorado’s 15-game point-streak with a 8-3 victory on Wednesday night in Saint Paul, Minn.

The eight-goal game was the fifth in Wild history, matching the franchise record.

Minnesota’s Cam Talbot made 29 saves to improve to 6-1-1 in his last eight starts.

Nathan MacKinnon and Mikko Rantanen each had a goal and an assist, Andre Burakovsky added a goal and Cale Makar had two assists for Colorado. The Avalanche had a five-game winning streak snapped and failed to gain a point in a game for the first time since a 3-2 home loss to the Arizona Coyotes on March 8.

Philipp Grubauer stopped just 11 of 18 shots before being pulled with 12:42 remaining for Jonas Johansson, who didn’t register a save. The loss snapped a personal- and franchise-record 13-game point streak for Grubauer, who went 12-0-1 during that span.

Minnesota, which had a franchise-record, 11-game home winning streak snapped by the Avalanche 5-4 on Monday, sandwiched power-play goals by Kaprizov and Fiala around the first career NHL goal by Johnson to build a 3-0 lead in the first period. Colorado managed just four shots on goal in the opening 20 minutes.

MacKinnon cut it to 3-1 just 34 seconds into the second period with his 15th goal of the season, but Hartman answered a little over four minutes later. Colorado closed within 4-3 later in the period on goals by Burakovsky and Rantanen, but Kaprizov upped the margin to 5-3 later in the period.

The Wild then blew the game open with three goals in the first 7:56 of the third period, two of them by Fiala and another by Eriksson Ek.