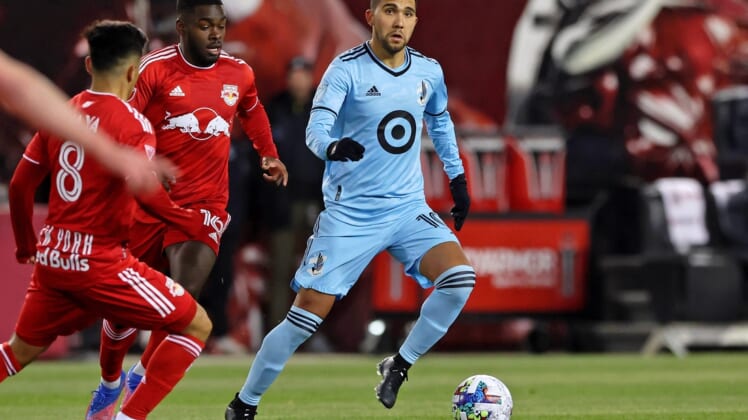 Luis Amarilla scored his third career goal in the 51st minute to lead visiting Minnesota United to a 1-0 victory over the New York Red Bulls on Sunday evening.

Dayne St. Clair made eight saves, including a stop of Patryk Klimala’s early penalty kick, in his first start of the season to keep Minnesota’s first clean sheet.

Regular Loons starter Tyler Miller was out with an illness after allowing a goal each in a pair of draws to begin the year.

The Red Bulls (2-1-0, 6 points) were held scoreless in their home opener after combining for seven goals in their two opening wins on the road.

After committing the foul leading to Klimala’s penalty, Hasani Dotson provided the cross to set up Amarilla’s volleyed strike. Amarilla met it perfectly and hammered a low finish between Red Bulls goalkeeper Carlos Coronel and the left post.

The goal was the Paraguayan’s first since his return to Minnesota following a year in the Ecuadorian first division. Amarilla previously scored two goals for United in 2020 while limited to only seven appearances due to injury.

The Red Bulls threatened early, with Klimala volleying Lewis Morgan’s cross wide of the near post in the seventh minute, and Morgan forcing a diving save from distance a minute later.

Not long after that, referee Lukasz Szpala awarded a penalty to the hosts after a video review showed Dotson guilty of a handball.

But St. Clair guessed correctly and dove to his left to save and hold Klimala’s low, poorly placed spot kick.

Moments into the second half, St. Clair stepped up again to deny Omir Fernandez with an outstretched foot after Fernandez one-timed Klimala’s cross from the right.

Amarilla put Minnesota in front not long after. But St. Clair still had to snuff out Aaron Long’s breakaway attempt in the center back’s rare foray up the field and Dru Yearwood’s late effort from beyond the penalty area to preserve all three points.