Minnesota United defender Michael Boxall on Thursday agreed to a contract extension that runs through the 2023 season.

Boxall, 33, said he feels very much at home with the club after spending parts of five seasons with Minnesota United.

“Very happy to commit the next couple of years here — I’ve really enjoyed my time here,” Boxall said. “I’m delighted that (my daughter) Maxwell has given me permission to stay here for a couple more years. Already the family makes so many sacrifices with my schedule and moving countries once or twice before, so now that the little ones are in school, with a good circle of friends, I want to affect them as little as possible. Happy to be setting deeper roots here for a couple more years.” 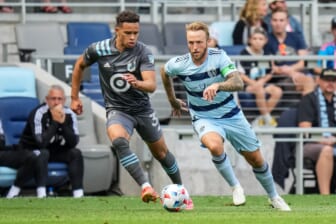 Boxall has registered three shots on goal while starting 13 games this season for Minnesota United. He has four goals in 124 career matches with Minnesota and Vancouver Whitecaps FC.

“Fully deserved, really pleased for Michael,” head coach Adrian Heath said in a club statement. “I was asked about Boxy the other week for an article and they asked me what is the best about him — consummate professional, great teammate, consistent, know what you’re getting and if every manager had plenty of Boxys in their club, they would be very, very happy. Delighted that he’s got a contract that he fully deserves. He’s earned his reward of a new deal.”