It was the fifth clean sheet of the season for Melia despite Sporting Kansas City (11-4-6, 39 points) losing midfielder Remi Walter to the red card in the 21st minute. SKC moved into a tie for the Western Conference lead with Seattle with the draw.

Tyler Miller finished with five saves for the Loons (7-6-7, 28 points), who moved into fifth place with the point. It was Miller’s seventh shutout of the season.

Marketed as the “Nicest Rivalry in Sports,” it took just six minutes before Minnesota United defender Bakaye Dibassy was awarded a yellow card for sending forward Alan Pulido sprawling on a challenge, the first of two yellows for the Loons. Fifteen minutes later, Walter was sent off for his studs-up, left-footed challenge into Emanuel Reynoso’s midsection near midfield.

Despite having the man advantage, the Loons had just one good scoring chance the rest of the first half. That came in the 30th minute when Reynoso set up Ethan Finlay who broke into the center of the box but had his point-blank shot deflected over the crossbar by Melia.

The Loons started the second half with a pair of excellent scoring chances. Reynoso’s left-footed shot from outside the penalty box bounced off the right post in the 48th minute, and four minutes later, Reynoso hit Adrien Hunou with a through pass breaking in on the right side of the box but Melia stopped Hunou’s right-footed attempt with his legs. 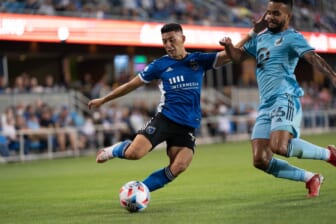 Sporting KC had a two-on-one counter in the 64th minute that saw Daniel Salloi’s cross set up Khiry Shelton with a wide-open shot from the middle of the box but Miller forced Shelton’s right-footed shot wide of the goal.

Melia kept it scoreless in the 69th with a double-save on a Hassani Dotson right-footed shot from outside the box and then stopping Hunou’s rebound attempt. Seven minutes later, Juan Agudelo stole the ball from Ilie Sanchez and broke in free but Melia turned aside his right-footed shot from the left side of the box.