The San Jose Earthquakes overcame a first-half red card to salvage a 1-1 draw against visiting Minnesota United on Tuesday night.

Earthquakes defender Nathan was sent off after 21 minutes following a video review, turning the game after San Jose had taken the lead via an own goal created by pressure from Cristian Espinosa.

Shortly after Nathan’s dismissal, Wil Trapp pulled Minnesota (7-6-6, 27 points) even with his first MLS goal since 2018.

But J.T. Marcinkowski made two saves to make sure San Jose (5-7-8, 23 points) ran its unbeaten run to nine matches, although seven of those are draws.

All-time MLS leading scorer Chris Wondolowski came on in the 86th minute for his 400th career appearance, becoming the seventh player in league history to accomplish the feat.

The Quakes took the lead after 12 minutes when Espinoza brought down a diagonal ball on the right flank, got down the right and drove in a low cross toward the near post that caromed off Bakaye Dibassy and past goalkeeper Tyler Miller.

But the match tilted in Minnesota’s favor a few minutes later when Nathan tried make up for a heavy touch with a sliding challenge meant to win back the ball from Dibassy. 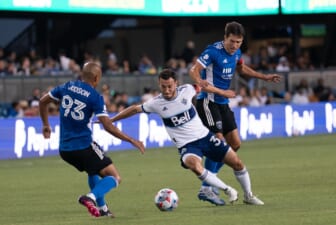 Instead, he caught Dibassy’s shin with a studs-up challenge that drew an immediate yellow card from match referee Victor Rivas. After a video review, Rivas determined he had been too lenient and issued Nathan a straight red.

In the immediate aftermath of Nathan’s dismissal, Emanuel Reynoso drove a cross toward the back post. Ethan Finlay reached it and found Adrien Hunou inside the area, and Hunou laid the ball back for Trapp to drive low and inside the left post.