The San Jose Earthquakes managed to continue their recent run of success without the benefit of a goal, playing to a 0-0 tie against the visiting Vancouver Whitecaps on Friday while extending their unbeaten streak to eight games.

The Earthquakes (5-7-7, 22 points) have not lost since June 26, when they were upended 3-1 by the Los Angeles Galaxy, as they moved one point from the Western Conference playoff line. Since their last defeat, the Earthquakes have gone 2-0-6, with five of those games on the road.

The Whitecaps (3-7-8, 17 points) extended their own unbeaten run to six games and finally moved out of last place in the Western Conference, one point ahead of expansion Austin FC. They tied their fifth consecutive game and have not lost since July 7 at Real Salt Lake (4-0).

The Earthquakes’ best chance for a goal came in the 62nd minute when Jeremy Ebobisse hit the right post from long range. Ebobisse was playing in his second game with San Jose, and making his first start, after he was acquired in a trade with the Portland Timbers.

Earthquakes goalkeeper JT Marcinkowski made three saves, while holding an opponent without a goal for the third time this season. Whitecaps goalkeeper Maxime Crepeau made three saves in his second game back after representing Team Canada at the Gold Cup.

Vancouver was without forward Lucas Cavallini, who sprained his left knee Sunday against the Galaxy. Cavallini also was with Canada’s national team at the Gold Cup.

It was the second 0-0 tie for the Earthquakes this season, also earning a point without a goal on June 19 against Austin FC. Vancouver played to a scoreless tie for the second time in its last five games, also doing it July 20 against the Houston Dynamo. 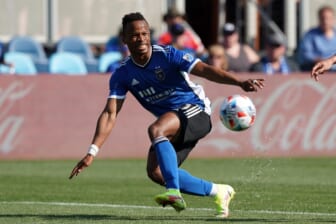