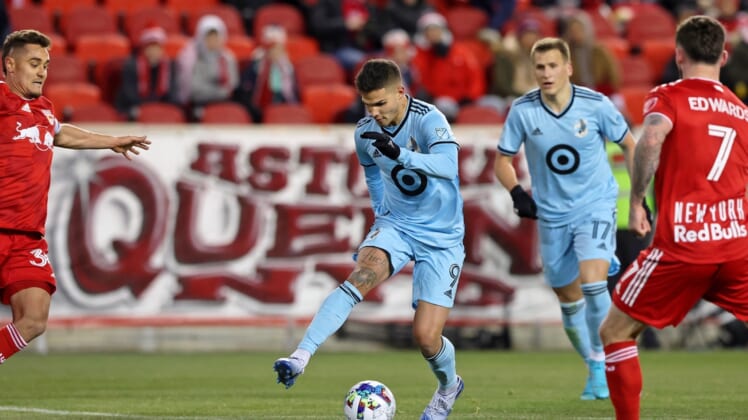 Minnesota United have leaned on their defense while struggling to produce offense against some of the league’s stingiest defenses.

Minnesota hopes to get its offense going and continue its unbeaten start Saturday night when they host the winless San Jose Earthquakes, whose eight goals allowed are tied for the most in the MLS.

Minnesota (1-0-2, 5 points) has scored three goals so far — the second fewest of any unbeaten team so far — but has also allowed two goals. After opening the season with consecutive 1-1 draws against Philadelphia and Nashville, the United earned a 1-0 win over the New York Red Bulls Sunday in Harrison, N.J.

“Overall, with the points total that we’ve got from the three games, I’m quite pleased because I knew going to Philly, coming here, and playing Nashville is a very difficult start for us,” Minnesota coach Adrian Heath said. “But it sets us up nicely for next week. If we were to go and get a result, that would be eight points in four games, and that would be a really good start.”

Luis Amarilla scored his third career goal in the 51st minute but the most impressive Minnesota performance came from Dayne St. Clair. St. Clair stepped in for Travis Miller (illness) and made eight saves, including a stop on a Patryk Klimala penalty kick early in the first half.

St. Clair’s performance earned him MLS Player of the Week Honors after he produced a clean sheet in a game where Minnesota was outshot 19-5.

San Jose (0-2-1, 1 point) has been outscored 8-4 so far and has conceded 49 shots so far, with 19 of those being on target. The Earthquakes scored a pair of late goals in a 3-3 draw with the Columbus Crew on March 5 but followed it up with a 2-0 loss at Philadelphia last week, when it held possession for 68.7 percent of the match but only mustered one shot on goal.

“We had control of the match. In the second half, that’s when we had clear goal-scoring opportunities,” San Jose coach Matias Almeyda said. “But today, we were lacking the depth to be able to hurt Philadelphia.”

San Jose also played three rookies during the match, as midfielders Ousseni Bouda, Will Richmond and Niko Tsakiris made their MLS debuts as substitutions in the second half.