The Minnesota Twins and center fielder Byron Buxton could not reach an agreement on a contract extension in recent negotiations, The Athletic reported Sunday.

Buxton, 27, is set to become an unrestricted free agent after the 2022 season.

According to the report, Buxton turned down a seven-year, $73 million extension offer from Minnesota, and the Twins rejected a counter-offer from Buxton’s camp.

The No. 2 overall pick in the 2012 draft, Buxton has spent his entire MLB career in Minnesota but has missed long stretches of time due to injuries. The only time he finished a season having played triple-digit games was 2017, when he appeared in 140 games, hit a career-best 16 home runs and won a Gold Glove. 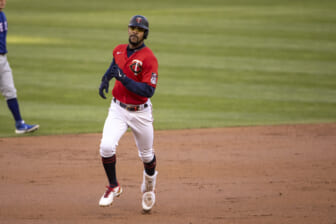 Buxton is batting .369 with 10 home runs this year but has only played 27 games. He missed 39 games during April and May with a Grade 2 hip strain, and he went back on the injured list in late June with a fractured left hand.