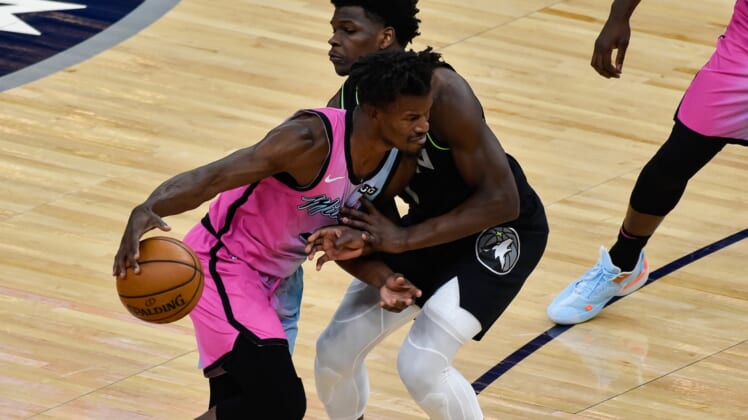 After losing its past two home games by a combined 55 points, the host Minnesota Timberwolves used a big fourth quarter to upset the Miami Heat 119-111 Friday night at Target Center in Minneapolis.

The Heat, which came into the night fighting for a playoff spot at seventh in the Eastern Conference standings, ended its four-game road trip with a third consecutive loss.

Minnesota has beaten Miami in its past five meetings and in six of the previous seven.

The teams meet again in Miami next month.

Minnesota, which had the worst record in the league entering the game, was getting blown out after the first period but bounced back with a solid second to make it a game.

The game was tied at halftime, but a Goran Dragic 3-pointer gave Miami a five-point lead going into the fourth.

Minnesota took over the game in the fourth, going on a 16-3 run punctuated by a 3-pointer from center Karl-Anthony Towns to make it 106-99.

Towns had missed the previous two home losses to Brooklyn and Milwaukee due to personal reasons. He had 24 points and five rebounds — and hit all four attempts from long distance against the Heat.

He fouled out when he blocked Jimmy Butler with 1:51 left with Minnesota holding a six-point lead.

Aside from Towns, the Timberwolves were paced by Ricky Rubio’s 17 points and 16 from Naz Reid.

Miami was led by Butler who came close to recording a triple-double with 30 points, 10 rebounds and eight assists. Trevor Ariza (21 points) and Bam Adebayo (17) also led the Heat.

The Timberwolves had a rough first quarter but made it a game by outscoring Miami by 11 in the second as the game was tied at halftime 61-61.

Anthony Edwards and Rubio led Minnesota with 10 points apiece in the opening half. Ariza paced the Heat with 16; Butler had 14.

Butler ended the first quarter with 11 points off 5 of 7 shooting as Miami lead by 11 going into the second.

Miami shot 68.4 percent from the field in the first quarter and forced seven turnovers.