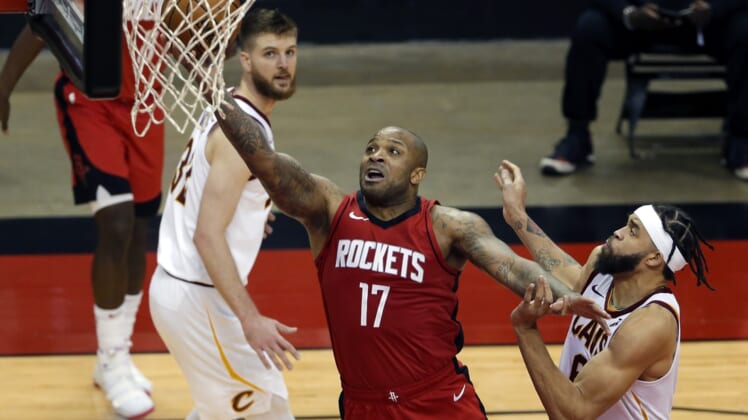 Milwaukee will also get forward Rodions Kurucs and its own 2022 first-round pick back. The Bucks had dealt that pick during the four-team trade in which then-Rockets star James Harden moved to the Brooklyn Nets.

Houston also will have the right to deal its 2021 second-round pick for Milwaukee’s 2021 first-round pick unless the latter is one of the top nine selections. That swap almost certainly will occur because the Bucks possess one of the top records in the NBA.

Tucker averaged 4.4 points and 4.6 rebounds in 32 starts for the Rockets this season.

Kurucs, 23, was acquired by Houston from Brooklyn earlier this season as part of the Harden deal. He averaged 1.2 points and one rebound in 11 games with the Rockets and has career averages of 6.1 points and 3.2 rebounds in 126 games (55 starts) in parts of three seasons.

Agustin, 33, will be joining his 10th team after averaging 6.1 points and 3.0 assists in 37 games (six starts) with the Bucks. He has career averages of 9.7 points and 4.0 in 901 games (326 starts) in 13 NBA seasons, with four-season stays in Charlotte and Orlando covering the majority of his career.

Wilson, 25, has played in 119 games (four starts) for the Bucks over the past four seasons, producing averages of four points and 2.9 rebounds. This season, he is at 3.6 points and 2.1 boards through 12 games, all off the bench.

Craig, 30, is averaging just 2.5 points and 2.4 rebounds in 18 games off the bench in his first season with the Bucks. He started 69 games for the Denver Nuggets over the previous three seasons and has career averages of 5.0 points and 3.3 rebounds in 190 games.

Houston has lost 17 consecutive games, but its building-block player, big man Christian Wood, returned to the lineup on Wednesday night to oppose the Golden State Warriors. Wood (ankle) was injured on Feb. 4, which also marks the last time the Rockets won a game.