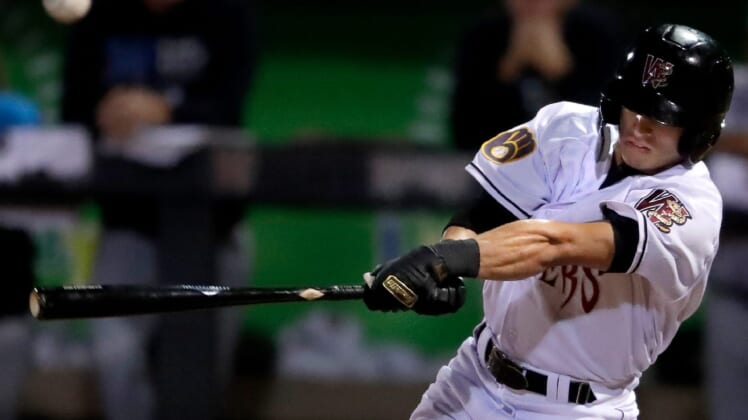 Milwaukee Brewers’ top prospect Sal Frelick is continuing his fast rise through the organization and earned another promotion on Tuesday. This time to the organization’s Double-A affiliate the Biloxi Shuckers.

Last summer, Frelick was the top pick for the Brewers in the MLB Draft. The center fielder from Boston College got his feet wet last year playing in both the Brewers’ Low and High-A teams. To begin the 2022 season, he started where he left off and was back on the roster for the High-A Wisconsin Timber Rattlers. And just like in 2021, he has put up numbers beyond the level he resided at.

Over the first 21 games of this season in Wisconsin, Sal Frelick had a slash line of .291./391/.456.  Plus, in a showcase of the solid pop in his bat, the top-100 MLB prospect had eight of his 23 hits go for extra bases, while also knocking in nine runs. Furthermore, he displayed the speed he has by logging six stolen bases and scoring 12 runs.

It is pretty impressive that Frelick has moved so quickly after being selected with the 15th pick overall in the 2021 MLB Draft. Before he was taken by the Milwaukee Brewers, reports on Frelick lauded his speed and the upside in his hitting abilities. As this example of a report from MLB.com explains:

“Offensively, he has a strong history of making contact and getting on base. He walked more than he struck out in 2019 and ’20 combined and has very impressive bat-to-ball skills along with plus bat speed, pointing to future potential as a plus hitter. He’s deceptively strong with good extra-base ability, and he could eventually get to average power from the left side of the plate.”

Frelick is on the small side at 5-foot-9 and 175-pounds and projects to be a corner outfielder at the next level. But not every hitter needs to big bopper, and a fast and contact-driven player like Frelick could be a nice B-side in a lineup that already has big hitters like Christian Yelich and Rowdy Tellez in it.