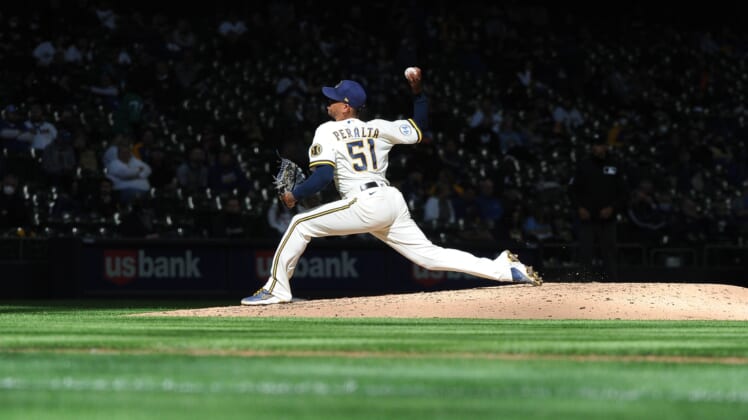 Two teams streaking in opposite directions early in the season meet again Tuesday when the Chicago Cubs host the Milwaukee Brewers on the second night of a three-game series.

A pair of young right-handers are scheduled to get the ball. The Cubs turn to Adbert Alzolay in an attempt to extend their run of wins to four, while the Brewers hope Freddy Peralta can be a skid-stopper for a team that has lost three straight.

The Cubs got a masterful pitching performance from newcomer Trevor Williams and home runs from Willson Contreras, Javier Baez and David Bote in a 5-3 victory in the series opener Monday.

The Cubs made the best of just five hits, while the Brewers didn’t have any off Williams before Omar Narvaez reached on an infield single to open the sixth inning.

Alzolay will seek to follow in the footsteps of Jake Arrieta, Zach Davies and Williams, all of whom pitched well at least into the sixth inning after ace Kyle Hendricks lasted only three innings against the Pittsburgh Pirates in the opener.

Arrieta, Davies and Williams were not with the Cubs last season.

“We’ve got a long season to go,” Cubs manager Davis Ross said after the Monday game, “but it’s nice and refreshing to watch the new guys perform and do all the things we expected them to be able to do.

“The additions we made were maybe a little under the radar, but it’s nice for them to get off to a good start in a Cubs uniform.”

Alzolay isn’t new to the Cubs. He made six starts among 10 appearances for Chicago over the past two seasons, going 1-1 with a 2.95 ERA last season.

The 26-year-old will be facing the Brewers for just the second time in his career, the first time as a starter. In his only previous outing against Milwaukee, he allowed one hit and one run in one inning on Sept. 6, 2019.

Coming off an 0-3 spring with a 10.57 ERA in four games, Alzolay will be facing a Brewers offense that has scuffled ever since a 6-5, 10-inning win over the Minnesota Twins on Opening Day.

Milwaukee has scored just five runs and totaled just 10 hits during its three-game skid. The 10 hits include just three for extra bases, including homers by Jackie Bradley Jr. and Narvaez.

If the Brewers had an excuse Monday, it was that many of them had received their COVID-19 shots — the one-and-done Johnson & Johnson variety.

“When it became available to us,” first baseman Keston Hiura said, “a lot of us jumped on it.”

Hiura, who has moved from second base to first base this season in order to create an opening for Kolten Wong, went 0-for-4 with two strikeouts Monday, extending his season-opening hitless streak to 15 at-bats. He has struck out eight times without drawing a walk.

The Brewers might need a big effort from Peralta, who will be making his second career start against the Cubs. In six previous meetings, including the lone start, the 24-year-old has gone 2-1 with a 5.40 ERA.

In his season debut Thursday, Peralta threw two scoreless innings in relief against Minnesota, striking out six and walking three.