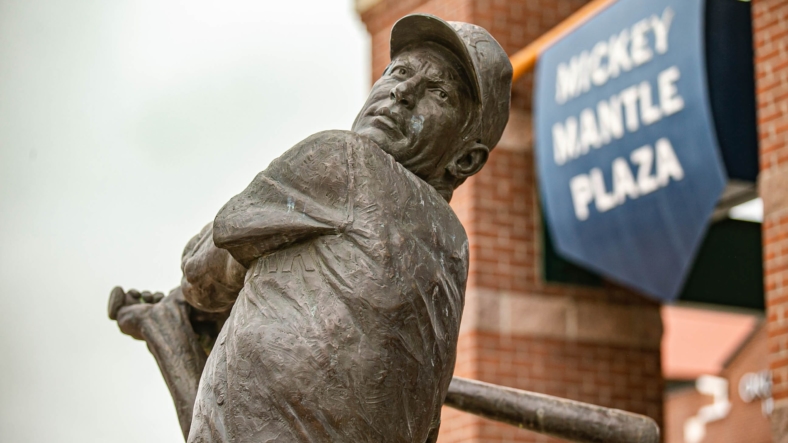 If you’re a sports fan, chances are you’ve either bought, or opened a pack of baseball cards in your day. Or maybe football or basketball cards, whatever your poison, cracking packs is always an exciting time. Yet, you could open thousands of sports cards and still never pull anything as valuable as a Mickey Mantle baseball card from 1952.

The ever-so-elusive collectable mentioned here is not even a rookie card, but it is Mantle’s first card made by Topps.

While Honus Wagner previously held the title for being featured on the most expensive sports card sale in the world after selling for $7.25 million just a few weeks ago, now Mantle, well, holds the mantle.

The card received a 9.5 grade for it’s spectacular condition and it actually has a fascinating story behind it, but that’s not what makes it valuable. As The Athletic notes, there are reportedly only three other Mantle cards with a better grade than this one.

But this card is unique in that Topps decided to ditch thousands of old baseball cards that weren’t selling into the ocean sometime around 1960, leaving few in circulation. Could you imagine? Maybe a few extras made it into the pockets of some stubborn collectors around the world, yet this card is likely in the best condition.

Amazingly, this Mantle card looks nothing like what we expect to be the most desirable cards today. It’s not flashy, there’s nothing shiny or reflective on the face. It’s just your typical card, complete with Mantle’s John Hancock. Design style aside, no one would be upset if they suddenly found themselves in possession of a card similar to the Mantle 1952 Topps special.

Mickey Mantle card was an attic find in the 1980s

This exact card actually sold for $50K in 1991 when Alan ‘Mr. Mint’ Rosen unloaded it to an anonymous buyer. Yet the card is believed to originally have been discovered again in a Massachusetts attic in the 1980s. Somehow, it’s been kept in pristine condition both then, and now.

So the next time someone tries to suggest your card hobby is nothing more than child’s play, kindly let them know you’re investing in your future, or maybe someone else’s. The point is, collecting cards can be a fun hobby.

It doesn’t have to be taken as seriously as whoever held this Mantle card in perfect condition for all these years, but sometimes when you take special care of your junk, it becomes a treasure worth millions of dollars. You just never know.

Yet, for every big find, there’s a dud, where you invest into a rookie who has all the potential in the world, and is being hyped as the next Hall of Fame talent, only to have their careers fizzle out. That’s the gamble.

In this case, Mantle’s card became incredibly valuable long after his career was done. No one was going around collecting autographed rookie cards back in 1951 when he made his MLB debut, yet Mantle’s position as one of the greatest baseball players of all time still stands. That’s quite the legacy for the former New York Yankee.

Related: Highest paid MLB players in 2022: Julio Rodriguez contract could be one of largest in MLB history