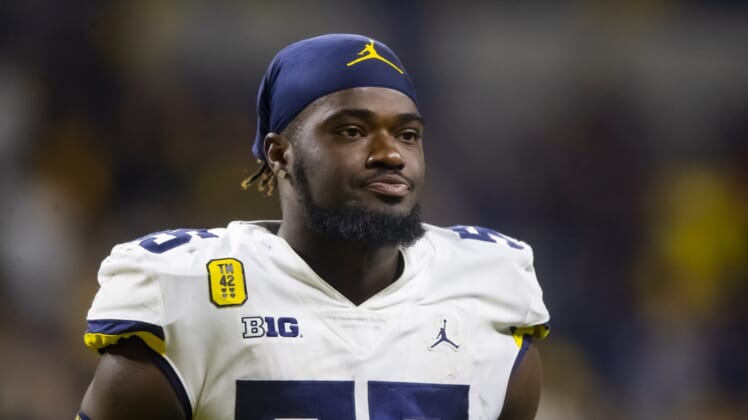 Michigan linebacker David Ojabo declared for the 2022 NFL Draft on Tuesday after a breakout season.

The 6-foot-5, 250-pound junior registered 11 sacks and five forced fumbles this season as the Wolverines advanced to the College Football Playoff.

“Coach (Jim) Harbaugh took a chance on a kid who had only played the sport for a year. I am eternally grateful for that opportunity,” Ojabo posted on Twitter. “Thank you to the Michigan coaches and staff for accepting me with open arms. Thank you to my brothers on the team who made me feel at home every day; was a pleasure working with you guys.”

Next chapter…?? Thank you God pic.twitter.com/NZU1qx2doS

Born in Aberdeen, Scotland, Ojabo didn’t start playing football until his junior year of high school after moving to the United States.

He did not appear in any games for Michigan as a freshman in 2019 and registered just one tackle in six games in 2020.

ESPN draft analyst Mel Kiper Jr. has Ojabo ranked as the No. 1 outside linebacker and the No. 9 prospect overall in the 2022 draft class.