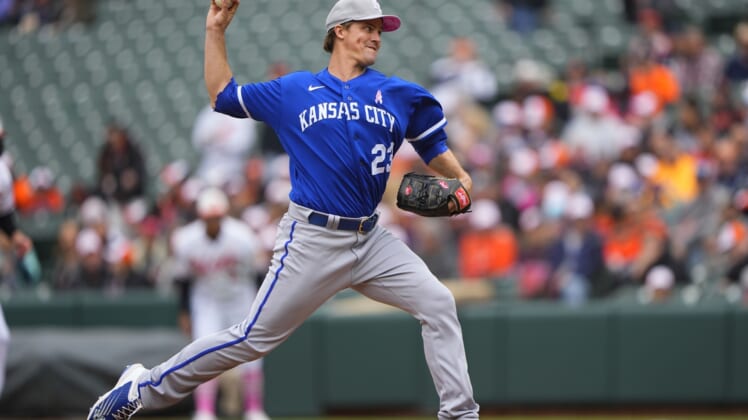 Michael Taylor’s RBI single in the ninth inning was the difference as the Kansas City Royals beat the host Baltimore Orioles 6-4 in the opener of a Mother’s Day doubleheader on Sunday.

Taylor Clarke and Scott Barlow combined for two shutout innings to close the game for the Royals.

Jordan Lyles started on the mound for the Orioles, allowing seven hits and three earned runs while striking out five in 7 1/3 innings. He notched the 900th strikeout of his career in the first inning when he got Edward Olivares to swing and miss on a high fastball.

Olivares fared better in his next at-bat, though, singling to center to score Kyle Isbel in the top of the third, tying the game at 1-1. Cedric Mullins had driven in Jorge Mateo in the bottom of the second to open the scoring for Baltimore.

The Royals continued to score in the fifth inning when Nicky Lopez hit into a fielder’s choice that was bungled by the Orioles. Ryan Mountcastle made a nice pick on the ground ball but rifled his throw into Isbel’s helmet. The error paved the way for Bobby Witt Jr. to score. Andrew Benintendi then hit a sacrifice fly to left field, scoring Isbel to give the Royals a 3-1 lead.

Zack Greinke got the start for the Royals, striking out three while allowing 10 hits and two runs in 5 2/3 innings. Greinke (0-2) is winless in six starts this season.

Mountcastle doubled off Greinke in the bottom of the fifth, scoring Austin Hays and cutting the Royals’ lead to 3-2. When the ball left Mountcastle’s bat, many thought it was a home run. The ball banged off the top of Camden Yards’ new left-field wall and bounced back into play.

The Orioles briefly led 4-3 in the bottom of the seventh, after Rougned Odor’s double scored Mountcastle and Hays. The Royals responded a half-inning later with Benintendi scoring on Ryan O’Hearn’s sacrifice fly.