Michael Pratt accounts for 6 TDs as No. 21 Tulane smashes SMU 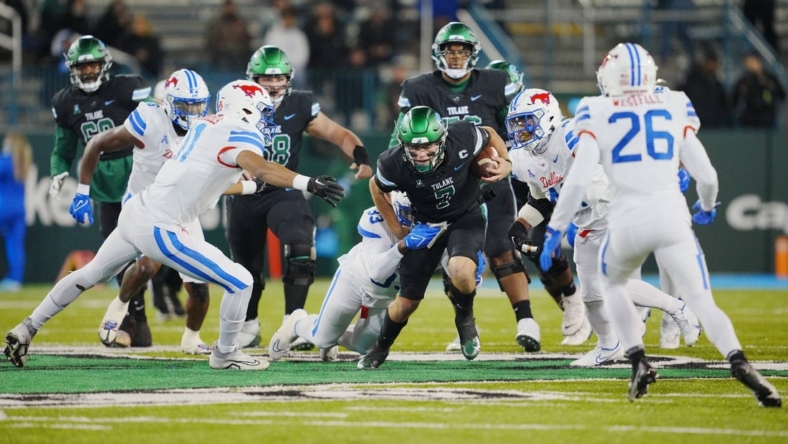 The Green Wave (9-2, 6-1) stayed in position to reach the AAC championship game. No. 20 UCF and No. 25 Cincinnati also have just one conference loss, and Tulane visits Cincinnati on Nov. 25.

Tanner Mordecai passed for 308 yards, with two touchdown throws to RJ Maryland, and two interceptions for the Mustangs (6-5, 4-3), who had won three in a row and lost to the Green Wave for the first time in eight matchups in the AAC.

Tulane drove 81 yards to a touchdown on each of its first two possessions. The first ended with Pratt running 6 yards and the second with Spears running 2 yards.

The Mustangs muffed a punt that Tulane recovered at the 7 and Pratt threw a 5-yard touchdown pass to Spears as time expired in the first quarter, increasing the Green Wave’s lead to 21-0.

A Green Wave fumble on a punt return led to a 19-yard touchdown pass from Mordecai to Maryland that trimmed the deficit to 21-7.

Keys returned the ensuing kickoff 63 yards and Pratt ran 26 yards for a touchdown and a 28-7 halftime lead.

Spears ran 12 yards for a touchdown and Pratt passed 48 yards to Wyatt for another before Mordecai threw a 13-yard touchdown pass to Maryland, leaving the Green Wave with a 49-14 lead at the end of the third quarter.

Pratt ran 1 yard for a touchdown, SMU’s Collin Rogers kicked a 30-yard field goal, Valentino Ambrosio answered with a 33-yarder and Roderick Daniels Jr. ran 2 yards for a touchdown to complete the scoring.