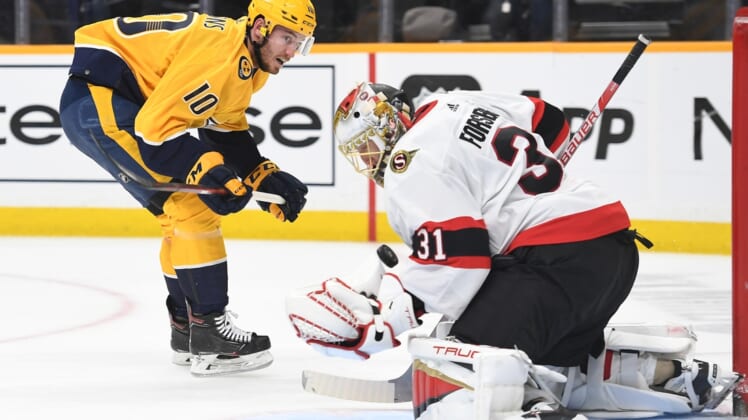 Light-scoring Michael McCarron recorded his second two-goal game of the month and Juuse Saros stopped 36 shots as the Nashville Predators overcame an early deficit to beat the visiting Ottawa Senators 4-1 on Tuesday.

In his fifth season of NHL action and second with Nashville, McCarron has totaled six of his eight career goals in 2021-22. He scored late in the first period to tie the game and near the end of the second to give Nashville the lead for good.

The Predators also got Tanner Jeannot’s NHL rookie-leading 23rd goal in the third and Matt Duchene’s empty-netter to build more playoff momentum with a ninth win in 13 games. Nashville also matched a season high with its fourth straight home victory.

Ottawa’s Brady Tkachuk set a career high with his 23rd goal early in the first period and Anton Forsberg made 28 saves, but the visitors went 1-for-6 on the power play and Saros was solid the rest of the night.

Tied for second in the league with 33 wins, Saros stopped a two-on-zero Senators chance early in the second period and got enough of his blocker to divert Connor Brown’s penalty shot with eight seconds left in the middle frame.

Nashville was whistled for three penalties in the first five minutes of the game, and Ottawa eventually made the Predators pay. With a five-on-three advantage, the Senators got some crisp passing from Josh Norris to Tim Stutzle, which resulted in Tkachuk pushing the puck by Saros to open the scoring at 4:53.

The Predators caught a break with 38.9 seconds remaining in the opening period. Again short-handed, Nashville dumped the puck and Forsberg waited for it to clear the trapezoid. It never did, and McCarron grabbed it to beat an out-of-position Forsberg with an easy wraparound equalizer.

With 1:46 remaining in the second, McCarron went backhand-forehand to push the puck through Forsberg’s legs.

On the downside for the Predators, Roman Josi’s 13-game point streak ended.

The Senators played one night after popular team owner Eugene Melnyk died from an illness at age 62.