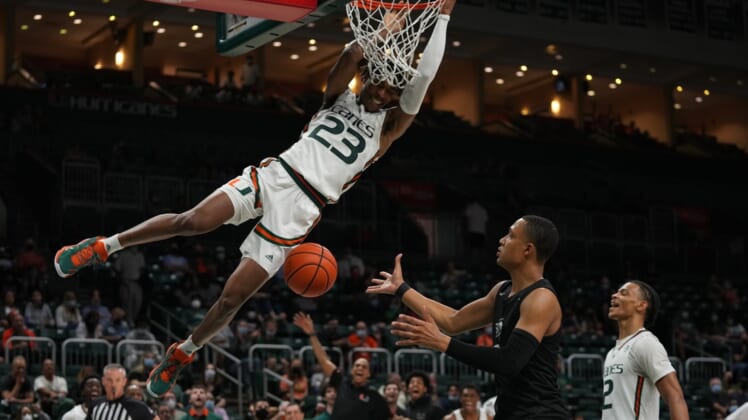 Wake Forest and Miami may have been generally perceived as lower-level ACC teams heading into the season, but both already own double-digit victories heading into their early conference contest Saturday night in Coral Gables, Fla.

No ACC team has more overall wins than Wake Forest’s 11, and Miami’s 10 wins already include a pair of conference victories, setting up an intriguing matchup.

The Hurricanes (10-3, 2-0) have shown themselves to be one of the league’s better-shooting teams (46.7% from the floor). The last time they won at least six straight – a 10-game streak at the outset of the 2017-18 season – was also the last time they finished with a winning record and reached the NCAA Tournament.

Four times already this season, Miami has rallied from halftime deficits to win, including the Canes’ most recent contest, a 91-83 victory over North. Carolina State on Wednesday. Isaiah Wong keyed the comeback by scoring 14 of his 19 points in the final 11 minutes.

Hurricanes coach Jim Larranaga said he talked to Wong just before that barrage.

The Canes also got a season-high 25 points from Jordan Miller and a double-double from Kameron McGusty (20 points, 11 rebounds). McGusty also had a team-high five assists.

Miami won despite playing without starting center Sam Waardenburg, who was out — along with freshman reserve Wooga Poplar — due to COVID-19 protocol. Waardenburg had started every game this season.

Without Waardenburg, the Canes were outrebounded, 41-32, including 18-6 on the offensive glass. It was the eighth time this season Miami has been outrebounded.

Wake Forest is coming off a 73-69 loss at Louisville, a game in which the Deacons held a nine-point lead early in the second half and led by one with 1:30 remaining but couldn’t hold on.

“Tough loss,” Wake coach Steve Forbes said. “We should have won. For the first time all season, we fouled too much.”

The Deacons have the ACC’s second-leading scorer in Alondes Williams (20.5), a 6-5 wing who has posted three 30-plus-point games and leads the league in assists (5.1).

Jake LaRavia (14.1) and Daivien Williamson (13.5) are Wake’s other double-figure scorers.

After a 6-16 season, Forbes transformed Wake’s roster by using the transfer portal: Williams is from Oklahoma; LaRavia is from Indiana State; Williamson is from East Tennessee State, and center Dallas Walton is from Colorado.

Walton, a 7-footer who has averaged 8.0 points and 5.4 rebounds, could have a big game considering Miami’s issues on the boards.