Miami Heat storm past the Houston Rockets with big second half 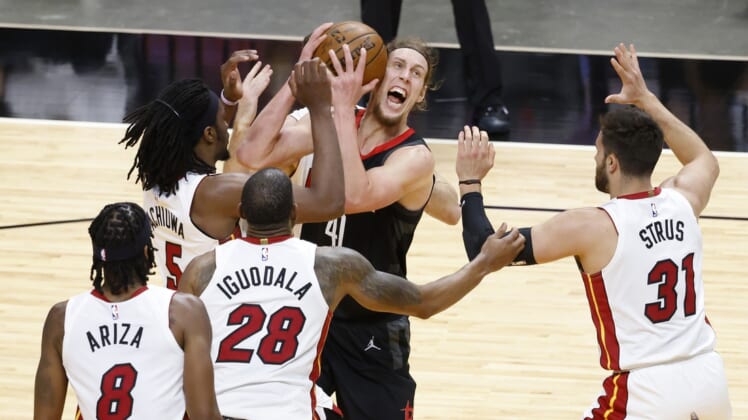 Kendrick Nunn had a season-high 30 points and added eight assists and seven rebounds, leading the short-handed Miami Heat to a 113-91 win over the visiting Houston Rockets on Monday night.

Those players combine to average 67 points this season. But the Heat still had enough firepower without them as Duncan Robinson and Goran Dragic added 19 points each.

The Heat led by as many as 29 points before cruising to the victory.

Nunn made 12-of-20 shots from the floor, including 6-of-12 on 3-pointers. His six threes tied his career high, and it was his third career 30-points-or-more game.

Christian Wood and Kevin Porter had 18 points each to lead Houston. John Wall had 14 points but just one after the first quarter.

Backed by 14 points from Wood and 13 by Wall, Houston led 55-54 at halftime. The Rockets were plus-six in free throws made and in paint points for the half.

Miami, though, had a huge third quarter, taking an 89-74 lead. Nunn had 10 points in the quarter, and Robinson added nine points. Meanwhile, Wood and Wall were held to one point each in the third.

The Heat put the game away with a 14-0 run in the fourth quarter.