Miami Dolphins Tua Tagovailoa tells his haters: ‘I can’t hear you, you’re not important to me’

Miami Dolphins quarterback Tua Tagovailoa let his haters know on Wednesday that he doesn’t even hear the noise or read their “clickbait” stories criticizing his NFL talents.

Tagovailoa, 24, has quickly felt the weight of expectation in being the starting QB for a prestigious franchise like the Dolphins. The organization selected him as the fifth pick overall in the 2020 NFL draft after an impressive tenure at Alabama University. And much has been demanded of him over his first two seasons. For the most part, he has delivered winning results in his 21 appearances as a starter.

However, it could be argued that the Dolphins’ 13-8 record in games he started could be in spite of his inconsistent play at times. The native of Hawaii has not delivered the same spectacular results consistently as he did in college, and it has now led to what could very well be a make-or-break third season in Miami.

While new teammates like Tyreek Hill and new head coach Mike McDaniel have been highly supportive of their starting signal caller publicly, Tagovailoa’s detractors still remain. However, the young QB says he doesn’t read or hear the criticism. In his mind, it’s just clickbait created by individuals whom he does not give any opinion credence, and he doesn’t know them so he can’t hear them anyway.

Tagovailoa will surely get many opportunities to prove he can reach his potential in 2022. However, with Terry Bridgewater waiting in the wins as the team’s backup, Tagovailoa may not get much more than half of the season to solidify his spot. 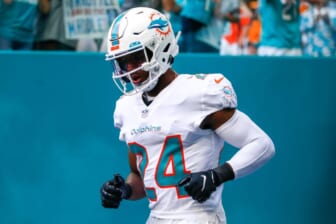