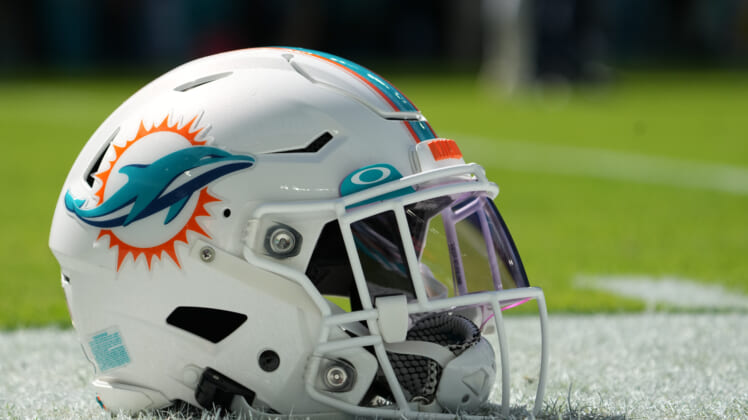 General manager Chris Grier has done everything possible to give McDaniel a winning hand. That includes pulling off a blockbuster trade for star wide receiver Tyreek Hill at the expense of five draft picks.

Before we delve into our Miami Dolphins mock draft, let’s check in on the picks they still boast following that Hill blockbuster.

At this point, there’s every reason to believe that Tua Tagovailoa will return for his third season as the Miami Dolphins’ starting quarterback. They also have a young stud wide receiver in that of Jaylen Waddle and the aforementioned Tyreek Hill

It’s now up to the combo of McDaniel and Grier to find some solid value with their limited draft pick assets.

Below, we delve into our full seven-round Miami Dolphins mock draft for the annual event in Las Vegas this spring.

Miami added former 49ers running back Raheem Mostert to reunite with McDaniel during free agency. It also brought in Chase Edmonds from the Arizona Cardinals. Despite this, there’s still a major need in the backfield in McDaniel’s running-back dependent offense. Said offense also requires backs with an ability to catch the ball. That’s exactly what Williams would bring to the table in South Beach.

The 5-foot-9, 194-pound back is absolutely electric with the ball in his hands. The former high school wide receiver can break the big play at any given moment and has tremendous second-tier speed. Imagine him teaming up with Hill and Waddle in Miami’s offense. It’d be insane.

Inside linebacker remains an issue for Miami from both a talent and depth standpoint. Elandon Roberts leaves a lot to be desired next to star Jerome Baker. Last season alone, Roberts yielded a 91.0 passer rating when targeted. Back in 2020, the former New England Patriots late-round pick gave up a 91.3% completion mark in coverage. That’s just ugly.

Enter into the equation this speedy 241-pound sideline-to-sideline linebacker. He figures to be a nickel linebacker in sub packages out of the game, something that the Dolphins need. Last season with Penn State, Smith recorded 81 tackles, five passes defended and two sacks. 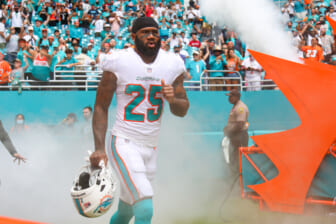 A punter? This Dolphins mock draft actually has the team using one of its four picks on a freaking punter? Don’t knock it. How good is Araiza? Most outlets have him as a top-120 prospect. Talk about getting value in Round 7.

Chris Grier and Co. are simply looking to round out their roster here. They just signed veteran Thomas Morstead and could use some competition. Araiza brings that in more ways than one. He averaged a college football record 51.2 yards per punt for the Aztecs a season ago. He also won the Ray Guy Award as the nation’s top punter. Need we say more?

Depth out on the edges is also a need for Miami. While the team was able to re-sign Emmanuel Ogbah, there’s not much more behind him in Miami’s 3-4 scheme.

Linebacker Jaelan Phillips finished second on the team with 8.5 sacks. The aforementioned Baker was third with 5.5. With an ability to play with both his hands down and from a stand-up position, Moon would be a great depth addition.

Tell us what you think about our Miami Dolphins mock draft in the comments section below.