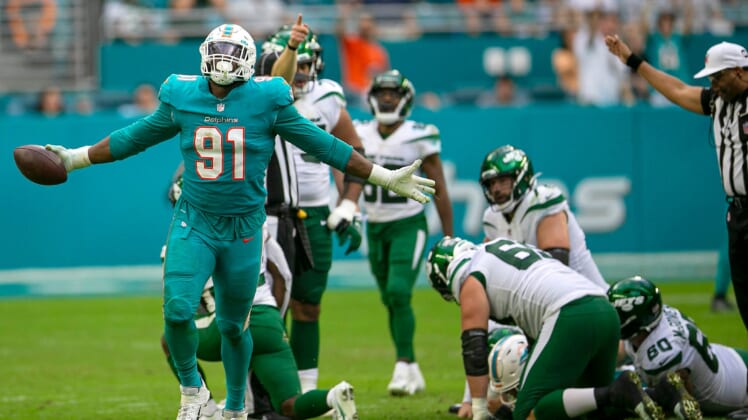 Within the first few minutes of the NFL free agent tampering period, star edge rusher Emmanuel Ogbah has himself a shiny new contract.

ESPN’s Adam Schefter reports that Ogbah has re-signed with the Miami Dolphins. The deal is said to be worth $65 million over four seasons.

One of the top free agents pass rushers of this class, Ogbah has been a godsent in his two seasons with the Dolphins. That span has seen the former Cleveland Browns second-round pick tally 45 quarterback hits and 18 sacks.

Impact of the Miami Dolphins re-signing

Miami was $48 million under the NFL salary cap before re-signing Ogbah. He was one of their core free agents to retain for a defense that played exceedingly well last season under former head coach Brian Flores.

The idea for Miami is to continue building a bully in the defensive front under new head coach Mike McDaniel.

Prior to joining Miami, Ogbah spent three seasons with the Cleveland Browns and one season with the Kansas City Chiefs. He recorded a mere 18 sacks during that four-year span. Once the former Texas star arrived in South Beach, he turned things around big time. He’s now being rewarded for it.