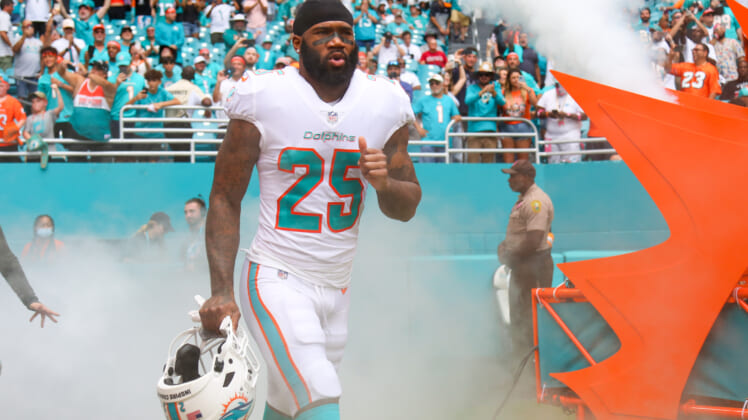 From signing Byron Jones to an $82 million contract in 2020, to drafting Noah Igbinoghene in the first round that same year, the Miami Dolphins have never been afraid to invest in their cornerback group. It makes sense. Once you have rare talent like Xavien Howard, it’s best to find a way to keep them around.

While Howard didn’t enter the league as first-round picks like Jones or Igbinoghene did, he wasn’t far off, going to the Dolphins at pick No. 38 in 2016. He’s since led the NFL in interceptions twice, making three Pro Bowl teams and earned All-Pro recognition in 2020.

Now the Dolphins are thanking him for his greatness, signing him to a contract extension, adding two years onto his existing one, to now go through the 2026 season. Howard’s new contract earns him $50.6 million in new money, while averaging out to $25.3 million per season. The grand total accounts for a five-year, $90 million contract, fully guaranteed.

It’s the most guaranteed money for a cornerback in NFL history and Howard’s now the highest-paid CB in the league. This goes along with having the highest-paid wide receiver as well, with Tyreek Hill earning $30 million in annual salary.

This continues a spending spree for the Dolphins in which they’ve already agreed to over $300 million in the 2022 free agency period. Not all guaranteed, but still a lot of big checks.

Related: Miami Dolphins have second-least draft capital out of 765 teams in past 24 years

It’s clear the Dolphins intend to compete for a playoff spot in 2022 in Mike McDaniel’s first year at the helm. There are no more excuses for Tua Tagovailoa, it’s time to go big or go home. Fortunately, they’ve provided him with the weapons with Jaylen Waddle and Tyreek Hill on the outside, while having DeVante Parker and Cedrick Wilson mixing in as well.

We can’t forget about Gesicki either, but as of now, he’s not under contract quite yet. General manager Chris Grier placed the franchise tag on him, but he has yet to sign. The Dolphins likely want to get their talented tight end under contract for longer than just one season, which makes Gesicki the next target.

It’s unknown how much money the Dolphins have left after Howard’s extension, so they may not break the bank and go for a big splash like Tyrann Mathieu, but there are other potential bargains to be had. Four-time Pro Bowl linebacker Anthony Barr could be one of them.

He offers versatility in that he is a sound tackler who can cover backs and tight ends while being able to mix in a few blitzes. At 6-foot-5, 257 pounds, he can be a problem for opponents. Unfortunately, his health has been the problem as of late. Barr has battled injuries, missing 22 games over his past three seasons, but he’s still a physical specimen who plays with a high IQ. He could help the Dolphins get to the playoffs during the 2022-23 season.