Mets score 5 runs in 6th inning to take down Padres 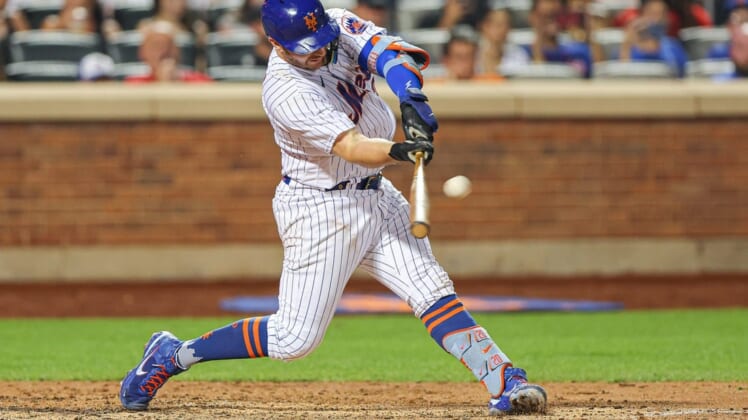 Luis Guillorme and Tomas Nido added RBI hits in the inning and Alonso added an RBI double in the seventh as the Mets avoided getting swept in the three-game series. They also increased their lead in the NL East to 1 1/2 games over the Atlanta Braves.

Padres starter Joe Musgrove (8-3), who entered the night with two losses, two no-decisions and a 5.04 ERA in his previous four starts, pitched out of a major jam in the fifth inning but didn’t survive the sixth.

Starling Marte singled and Francisco Lindor doubled, putting runners at second and third with no outs for the second straight inning. But where Musgrove got three groundouts to end the fifth unscathed, he surrendered the 425-foot no-doubter to Alonso.

The four RBIs gave Alonso the major league lead with 82, one better than the Yankees’ Aaron Judge.

The Mets’ burst came after the Padres took a 1-0 lead in the top of the sixth against reliever Drew Smith. Nomar Mazara singled and raced home on Eric Hosmer’s double to left. San Diego’s bid for more ended with Brandon Nimmo’s leaping catch as he banged into the fence in left-center on Austin Nola’s fly ball.

The win went to Smith (2-3), who gave up two hits and the run in his one inning after relieving starter Carlos Carrasco. The Padres peppered Carrasco with baserunners in the early innings but couldn’t score.

Edwin Diaz notched his 21st save in 24 opportunities after the Padres scored two runs in the top of the ninth and had runners on the corners. He allowed a run to score on a groundout.

In five innings, Carrasco allowed six hits and two walks with one strikeout.

After Alonso drove in a run in the seventh, the Mets added two more in the inning on Mark Canha’s infield single and subsequent throwing error by third baseman Manny Machado.

Nola singled home a run in the eighth, and Machado, Jorge Alfaro and Hosmer had RBIs in the ninth. Machado finished with three of the Padres’ 13 hits.

In his debut with the Mets, designated hitter Daniel Vogelbach went 1-for-3 with a walk and a run scored. The Mets finished with 12 hits.