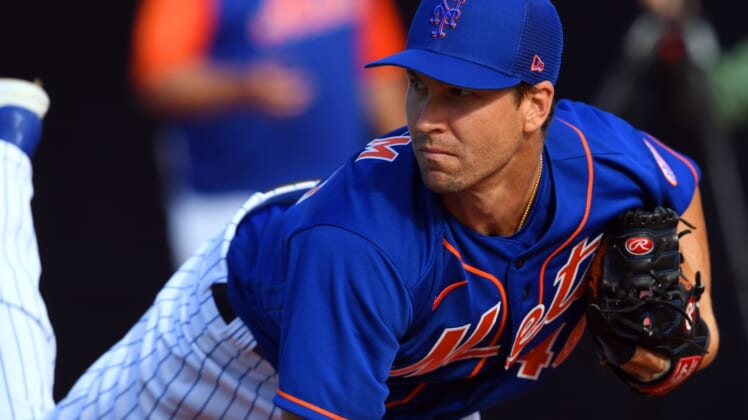 New York Mets right-hander Jacob deGrom said he wasn’t expecting doctors to tell him his shoulder tightness would keep him from throwing for about four weeks.

But with a diagnosis of a stress reaction in his right scapula after undergoing an MRI exam, deGrom will miss his planned Opening Day start — and likely several more.

“Yeah I mean I’m really frustrated,” deGrom, 33, told reporters Sunday in Port St. Lucie, Fla. “Like I said, I came into camp feeling really good, felt like my elbow and shoulder were in a good spot, and then to hear a stress reaction in the bone was definitely something I was not expecting. Level of frustration is really high right now.”

General manager Billy Eppler told reporters on Friday that even if deGrom’s follow-up MRI comes back clean, the pitcher will need time to build up arm strength before he can make his season debut. Eppler said he expects deGrom to miss two months.

The Mets’ ace was off to a good start to the 2022 spring season. In two spring training starts, deGrom struck out 10 in five innings. He gave up one run and five hits before experiencing the shoulder tightness.

The setback represents another health blow for deGrom, who didn’t pitch after July 7 of last season due to elbow issues. He doesn’t know what caused this issue, either.

“That’s something that I’ve been trying to figure out,” deGrom said. “I felt like I put myself in a good spot this offseason to be ready to make 30-plus starts. So I’d be guessing if I said exactly what happened. I tossed around, short ramp-up. I haven’t pitched competitively in what 10 months, if you really looked at it that way. But that would be a guess if I said exactly what happened.”