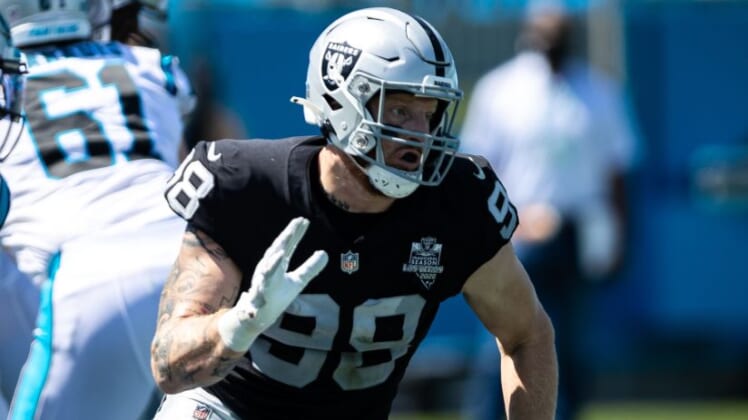 Defensive end Maxx Crosby has been one of the lone bright spots on the Raider’s defensive line and is proving that he can be a cornerpiece of this team for years to come.

While he’s only midway through his second NFL season, defensive end Maxx Crosby is already playing a large role on the young Las Vegas Raiders team. The Eastern Michigan product is another gem from general manager Mike Mayock’s 2019 NFL Draft and has stepped up into a leadership role for the team’s young defensive unit.

Expectations were low for Crosby entering his rookie season as a fourth-round draft pick from a non-Power Five school and analysts were concerned over whether Crosby would be flexible enough to be an effective NFL pass-rusher. Sixteen games later Crosby would get the last laugh as he paced the team with ten sacks, three more than anyone else on the roster.

Despite now only being in his sophomore campaign, Crosby has shown that his magnificent rookie season was no fluke and that he’s ready to embody what it means to be a Raider at such a young age.

The Raiders addressed their pass rush in the 2019 draft by using draft capital to select not only Crosby in the fourth round but Clemson defensive end Clelin Ferrell with the fourth overall selection as well. The pass rush was clearly a large issue as the team had only managed 0.8 sacks per game in 2018, and it seemed as if the investment into those two players paid off as that number rose to 2.0 sacks per game in 2019.

So far through the 2020 season, this progress has stalled though Crosby has continued his impressive play. He spoke to Vic Tafur of The Athletic in late November and detailed how opposing teams have changed their approach to blocking him, yet Crosby expressed how “At the end of the day, if I get double-teamed or if I have a one-on-one, I have to win.” (Q&A with Maxx Crosby, The Athletic).

No other Raider defender has more than 1.5 sacks so far this year and if that trend continues Crosby should expect to see plenty more double-teams. It’s on the rest of the team to help Crosby get to opposing quarterbacks and draw some more attention from offensive lines, allowing defensive coordinator Paul Guenther to dial up some more exotic blitzes.

Despite all the success that Crosby has experienced on the gridiron, it’s his leadership skills and tough demeanour that has helped establish him as a fan-favourite early in his career. He has brought a new energy, along with other young defenders such as Johnathan Abram, to a Raiders defensive unit that has underachieved the past few years.

Crosby’s early career success represents a changing of the guard for a defensive group that had lost their mojo in recent seasons. If he continues on this pace, multiple Pro Bowls are in the cards for Crosby and hopefully. that individual success translates to team success.

Right after he selected Crosby out of Eastern Michigan, head coach Jon Gruden had one request for the sack specialist: “I need you to get (Chiefs quarterback Patrick) Mahomes” (The Herd, Colin Cowherd with Maxx Crosby). With the Chiefs still representing the gold standard in the NFL, Crosby will keep working until he gets Mahomes.