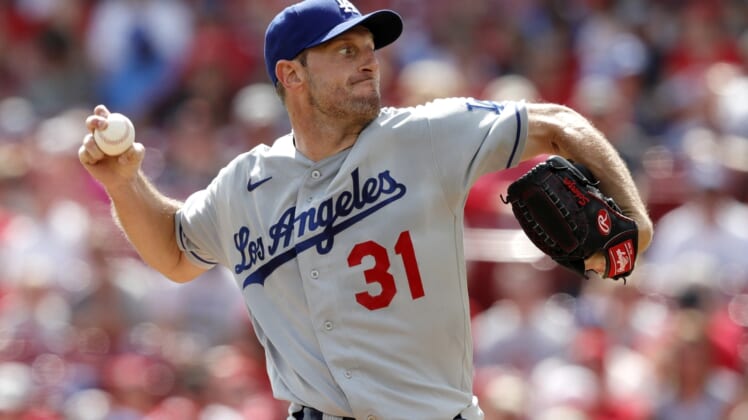 Max Scherzer ran his personal win streak to 11 games after tossing seven scoreless innings while the visiting Los Angeles Dodgers took advantage of shoddy defense in a 5-1 win over the Cincinnati Reds on Saturday afternoon.

Scherzer (15-4), who took a perfect game into the eighth inning of his previous start, struck out seven and walked two. The strong pitching performance sent the Dodgers (95-54) to their seventh win in the last eight games.

Scherzer is 7-0 with a 0.78 ERA in his nine starts with the Dodgers since being acquired from the Washington Nationals at the trade deadline.

The Reds could muster only three hits while watching their modest two-game win streak come to an end. Cincinnati (77-72) must win Sunday to avoid losing its eighth consecutive series.

The Dodgers (95-54) lost their bid for a shutout when Corey Seager’s nonchalant throw to first base with two outs in the ninth inning short-hopped Max Muncy, allowing Joey Votto to score.

Kenley Jansen fanned the only batter he faced to convert his 13th consecutive save and 34th on the season overall.

Scherzer retired the final 12 batters he faced Saturday. He has not allowed an earned run since Aug. 21, a run of 36 2/3 innings.

Gray was charged with four runs on five hits over six innings. He struck out five and walked two.

Gavin Lux, who missed Friday’s game after sustaining a bone contusion on his forearm in batting practice, tripled in two runs with a liner down the right-field line. Austin Barnes tapped weakly back to Gray, but it was enough to score Lux from third base to give the Dodgers a 3-0 lead.

Home plate umpire Brian O’Nora sought medical assistance in the third inning after complaining of light-headedness. He was removed from the game as a precaution prior to the bottom of the fourth inning, with Fieldin Culbreth replacing him behind the plate. Three umpires were used for the remainder of the game.

The 20-minute delay had only a minimal impact on Scherzer, who walked Votto for a second time on four pitches to open the fourth inning. But the ace right-hander settled down, getting Moustakas to pop out to short and striking out Kyle Farmer and Tucker Barnhart to end the inning.