Mavs underdogs at Warriors but odds shorten ahead of Game 1 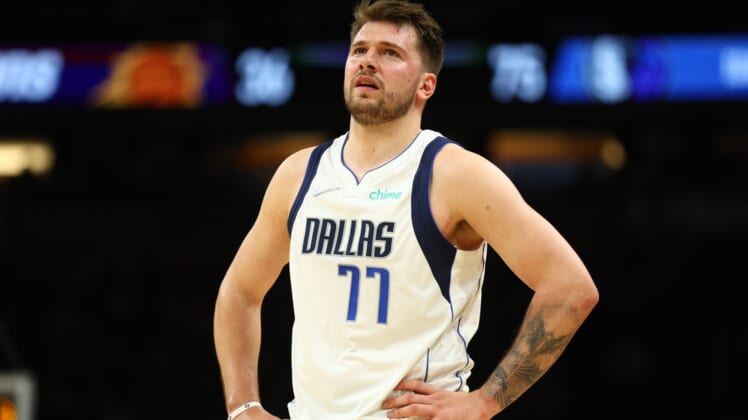 Luka Doncic and the Dallas Mavericks will be looking to continue their regular-season mastery of Stephen Curry and the Golden State Warriors when the Western Conference finals tip off Wednesday night in San Francisco.

Only one game separated the teams in the regular season, and it’s because of the Warriors’ 53-52 edge in wins — rather than the Mavericks’ 3-1 triumph in the season series — that Golden State has earned the home-court advantage in the best-of-seven.

The disparity in win totals is a far cry from the last time the clubs faced each other in the playoffs. That historic event 15 years ago saw the eighth-seeded Warriors, who won 25 fewer games than the Mavericks, shock top-seeded Dallas in six games in what has become known in San Francisco as the “We Believe” series.

The Warriors won all three of their home games in that series, and home court could be critical this time as well, with Golden State yet to lose in six games on its home floor this postseason.

The Mavericks have won five straight at home after a series-opening loss to Utah.

Both teams upset better-seeded opponents to arrive at just their second-ever meeting in the postseason. Fourth-seeded Dallas took out Phoenix, the Western Conference regular-season champ, in seven games, while third-seeded Golden State disposed of No. 2 Memphis in six games.

Doncic, who averaged 32.6 points in the series against Phoenix, outscored Curry in all four regular-season head-to-heads this season. In fact, their personal duel wasn’t close, with the Dallas star running up 26-14, 25-18, 34-27 and 41-21 scoring advantages.

The Mavericks didn’t see the Warriors at their best, with Draymond Green missing the last three meetings and Klay Thompson missing two of the first three.

Then again, the Warriors saw the Mavericks only twice after Dallas’ headline-grabbing trade of Kristaps Porzingis at midseason, with newcomer Spencer Dinwiddie leading the Mavericks to wins in the last two meetings with a total of 41 points.

Based on their history of having made the Western Conference finals six times in the past eight seasons and owning the home-court advantage, the Warriors go into the series as the favorite, even with coach Steve Kerr warning them not to think that way.

“Every opponent at this stage is going to pose a huge threat because only the best teams are left,” said Kerr, who missed the last three games of the Memphis series with COVID. He has been cleared for the start of this series.

“It’s all about figuring it out,” he continued, “and I thought our team and our staff did a really good job over the course of Games 4, 5 and 6 (against Memphis) of making that adjustment to the way the series had shifted and kind of finding a way to get through.”

The Warriors have had two extra days of rest, having wrapped up their second-round series on Friday while the Mavericks were going the distance to a Game 7 in Phoenix on Sunday.

Doncic appeared to pull from Warriors-Mavericks history when gushing over the elimination of the Suns, declaring: “We came here with a statement in Game 7. We believed. So I’m just happy.”

Both teams will be without one of their most famous names, with the Mavericks having lost Tim Hardaway Jr. for the season to a broken foot, while the Warriors likely will remain without Gary Payton II, who fractured his left elbow in Game 1 against the Grizzlies.

Golden State expects to have veteran Otto Porter Jr. (sore foot) back for Game 1, but awaits a re-evaluation of Andre Iguodala’s neck injury on Thursday before projecting his potential entry into the series.