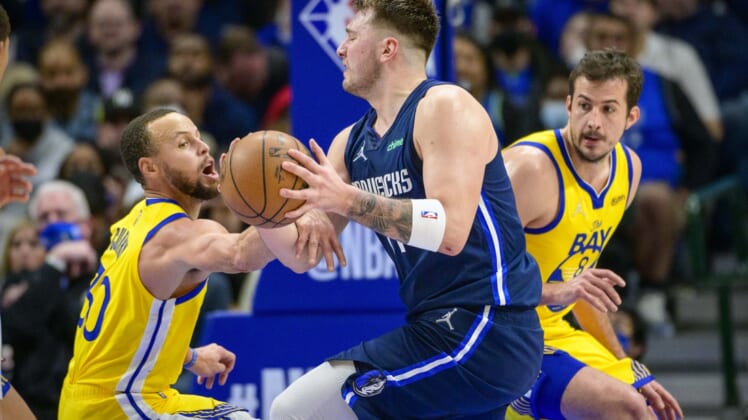 With the Dallas Mavericks’ organization celebrating the career of Dirk Nowitzki by retiring his No. 41 jersey and raising it to the rafters at American Airlines Center on Wednesday, the stage was set for the Mavericks to produce offensive fireworks befitting the sixth-leading scorer in NBA history.

Instead, Dallas opted to maintain its recent trend of playing stifling defense, smothering the Golden State Warriors 99-82 to extend its winning streak to four games.

The Mavericks, who will travel to face the Houston Rockets on Friday night, limited the Warriors to a season-low scoring output, roughly 28 points below their per-game average. It marked the fifth consecutive game that Dallas limited an opponent to less than 100 points.

“That’s pretty amazing,” Mavericks guard Luka Doncic said. “It was just unbelievable the way we played defense, everybody together.”

That the Mavericks have found a defensive stride without center Kristaps Porzingis, who has missed three games while in the league’s health and safety protocol, is a testament to their team-centric approach to defense.

The Warriors’ flowing offense taxes even the stoutest defenses, and Dallas’ effectiveness against Golden State provided a glimpse of the Mavericks’ potential on the defensive end of the court whenever their roster is whole again.

“Everyone was active and loud,” Mavericks forward Dorian Finney-Smith said. “This is one of the great offensive teams. They move the ball, and they have a lot of assists. We knew we were going to have to talk. They barely run plays, they just play off each other, so we had to talk and stay together.”

Rockets coach Stephen Silas had bristled earlier Wednesday against suggestions that his team had culture issues following the one-game suspensions of Kevin Porter Jr. and Christian Wood for conduct detrimental to the team for incidents stemming from a loss to Denver on Jan. 1.

Silas earned a measure of immediate validation when Wood produced his team-leading 18th double-double (22 points, 11 rebounds) before Porter drilled a 3-pointer with 0.9 seconds left to lift Houston to a 114-111 road win over the Washington Wizards that ended an eight-game skid.

“It’s funny how this league is and how life is with where we were 48 hours ago and then where we were as far as C-Wood playing as solid a game as he’s played all season,” Silas said. “Focused and attacking and rebounding and on every coverage — he was so good.

“And then (Porter) struggled. He made plays for his teammates (but) struggled shooting the ball. But making the game-winner, it’s just funny how life is, because prior to the game, everybody was talking about our culture and all that stuff.”

Beyond the contributions of Porter and Wood, the Rockets needed a win. Houston endured a 15-game losing streak earlier this season, and with their current skid having reached eight games, it was easy to understand how nerves were beginning to fray. Despite a commitment to rebuilding with a young roster, the Rockets long to win. The result in Washington was welcome.

“We’re going to stay together through thick and thin,” Porter said. “I feel like we showed that being able to bounce back. Yeah, we just needed this one.”