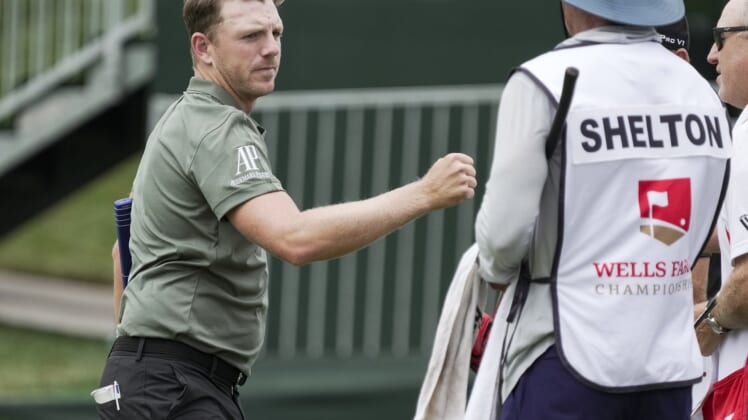 May 7, 2021; Charlotte, North Carolina, USA; Matt Wallace finishes the day with a 67 during the second round of the Wells Fargo Championship golf tournament. Mandatory Credit: Jim Dedmon-USA TODAY Sports

Matt Wallace had never competed at Quail Hollow Club until this week. He added the Wells Fargo Championship in Charlotte to his PGA Tour schedule for the first time because he felt up for the challenge.

The Brit called Quail Hollow “a beast of a golf course” in comments to Sky Sports after carding a 4-under 67 Friday to join a three-way tie for the 36-hole lead at 6 under with Gary Woodland and Patrick Rodgers.

“I’ve always tried to progress my career in ways where I’ve put myself in sticky spots,” Wallace said. “It’s tough over here. The PGA Tour is really tough. The golf courses are amazing. They’re big. The players from top to bottom can win. So it’s very difficult to get it done.”

Wallace is seeking his first PGA Tour victory, but owns 10 professional wins, including four on the European Tour. The 31-year-old believes increasing the time he spends in North America is the next logical step for his career.

It appears that approach is working. A top-20 finish at the Arnold Palmer Invitational at Bay Hill in early March propelled him forward, and soon he notched a third-place finish at the Valero Texas Open — his best career result on the tour — and made the cut at the Masters for the second straight year the following week.

Wallace, the 52nd-ranked player in the world, made five birdies and just one bogey Friday, improving upon a Round 1 69 that featured four bogeys.

Woodland, the 2019 U.S. Open champion, started Friday on the back nine and rebounded from consecutive bogeys on Nos. 17 and 18 by going bogey-free the rest of the way. He finished with a 69.

Dating back to September, Woodland has made only six of 14 cuts — missing seven and withdrawing from one event due to a hip tear — and dropped from 39th in the world at the end of 2020 to 61st entering the Wells Fargo.

Some hip discomfort recently returned, and Woodland admitted just last week that he was considering taking time off from competition if things didn’t take a turn for the better. Flash forward to this week, and Woodland may have a new lease on life.

“Last week was pretty much rock bottom for me,” Woodland said Friday.

He said things turned around after he spent the weekend working with swing coaches Butch Harmon and Pete Cowen.

“The short game, the putter, everything else has been alright,” Woodland said. “I’ve just hit it so, so bad, and for me to be successful I gotta rely on my ball-striking and I haven’t done that in over a year.”

Rodgers’ share of the lead might be more surprising than Woodland’s, given that the American has missed eight of 13 cuts since January and has managed only one top-20 finish in that span. Rodgers sank an eagle on No. 7 and shot a 3-under 68 for the second straight round to join the leaders.

Phil Mickelson held the solo lead after the first round but slipped down the leaderboard with a 4-over 75 that placed him at 3 under for the event, in a tie for 10th.

Mickelson, 51, said he didn’t feel as sharp on Friday after his first-round 7-under 64 vaulted him ahead early. He played the front nine to even par, but bogeyed Nos. 11 and 15 and put his tee shot on the par-3 17th into the water en route to a double.

“But I’m excited to be in contention heading into the weekend, and I know I’m playing well,” Mickelson said. “So that’ll be the big thing for me, is just to be present on each shot. Because I threw two shots away on 15 and two on 17 and that ultimately is things I’ve been doing, and I just can’t keep doing that. I’m optimistic for the weekend, though.”

Kramer Hickok (68-69) finished alone at 5 under for fourth place entering the weekend. Rory McIlroy (72-66) is part of a five-way tie for fifth at 4 under. 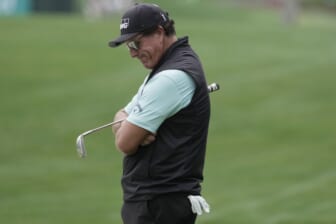