Phil Mickelson loses focus in rough round at Wells Fargo 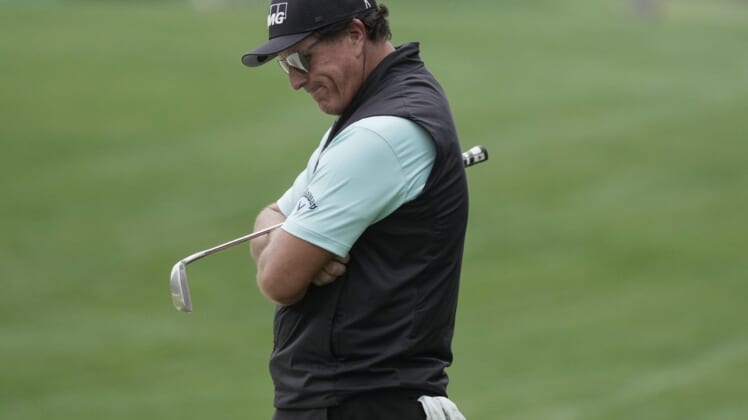 May 7, 2021; Charlotte, North Carolina, USA; Phil Mickelson after his bogey on 15 during the second round of the Wells Fargo Championship golf tournament. Mandatory Credit: Jim Dedmon-USA TODAY Sports

Phil Mickelson thought he played well in Round 1 on Thursday at the Wells Fargo Championship; in Round 2 he said he wasn’t doing enough high-level thinking en route to a 4-over 75.

“I just wasn’t sharp,” he said, later providing an example from his water-bound tee shot on No. 14. “I stepped in there, I was going to hit a draw, standing over it, I’m going to hit a fade and I just made an awful swing, lunged forward on it.”

Mickelson scrambled his way to par on 14, and his 3-under 139 keeps him in the field for the weekend at Quail Hollow Golf Club in Charlotte.

Mickelson was still at 7-under before a bogey on No. 11 and at plus-3 the rest of the way.

On 15, a par 5, he again struggled with his thought process.

“I hit a great drive and I kind of went blank on the 2-wood because I couldn’t quite get it there and I wasn’t sure what I was doing and I just kind of hit without realizing I was hitting and a purpose and a swing purpose,” he explained. “It’s just little things like that that I’ve been struggling with. Then I hooked it to the right and compounded it with a few bad wedges.”

He pushed his tee shot at the par-3 17th into the water, too, and carded a double bogey.

“I think kind of an example of what I’ve been talking about is like on 17,” he said. “We’re standing over the ball and I’m changing my mind and I’m changing the shot, moving the clubhead a little bit and it just — instead of backing away and kind of refocusing, I just kind of hit it and I’m not really kind of aware of what I’m doing. So, I’ve got to fix that and work on it.”

Mickelson, who hit 14 greens on Thursday but only seven on Friday, has recently talked about trouble with focus related to his age (50).

Regardless, he’s not backing down and is eager for the final two rounds.

“There’s things from meditation to, you know, things you eat,” he said. “There’s just a lot of exercises, getting your eyes moving to kind of get your brain going. There’s a lot of little things that I’m doing out there to try to stay focused. But it’s getting better. I’m optimistic for the weekend.” 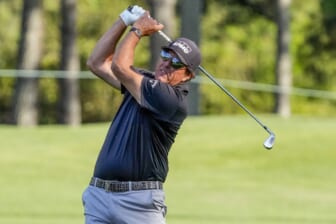