A memorial service will take place Thursday and a memorial fund has been launched to honor Matiss Kivlenieks, the Columbus Blue Jackets goalie who was killed July 4 in a fireworks accident.

The service, to be held in Upper Arlington, Ohio, will be private and limited to family and invited guests. The 10 a.m. service will be streamed live on the team’s website.

His mother, Astrida, and younger sister, Madara, have arrived in Columbus from Latvia. In Kivlenieks’ adopted city, his family will see the tributes that have poured in following his death, including the launch of the Matiss Kivlenieks Memorial Fund on Tuesday.

In partnership with the Blue Jackets Foundation and the McConnell family, the owners of the team, the fund will support youth hockey initiatives in Columbus and in Latvia.

Contributions up to $80,000 will be matched by the Blue Jackets and the McConnells. That amount was chosen to represent Kivlenieks’ jersey No. 80.

Kivlenieks, 24, died in a fireworks mishap at a Fourth of July party in Novi, Mich. 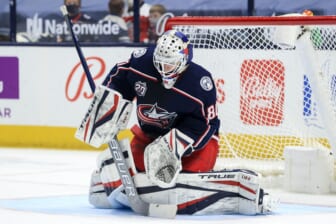 “In addition to being an outstanding player, Kivi was a warm and engaging young man who made a significant impact on our organization and all those who knew him,” the team said in a news release.

“… The outpouring of love and support for Kivi and our organization since his passing has been both overwhelming and inspiring. All contributions that have already been made to the Foundation in his name will be directed to this fund.”

Meanwhile, prosecutors in Oakland County, Mich., are reviewing the report into the police investigation into the goaltender’s death. The report revealed no wrongdoing, Novi police Lt. Jason Meier told the Detroit Free Press.

“We are not asking for any criminal charges,” Meier said. “But we did give it to the Oakland County prosecutor to review, just because of the high profile nature — to get a second set of eyes on it, make sure we didn’t miss anything.”

He played for Team Latvia in the 2021 IIHF World Championships this spring and was 1-2 with a 2.18 GAA, .922 save percentage and one shutout in four games.