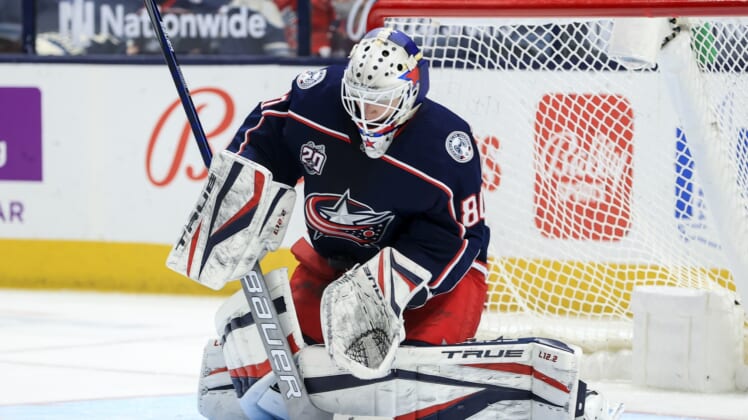 Columbus Blue Jackets goalie Matiss Kivlenieks has died at the age of 24 following a tragic accident on Sunday.

Reports surfaced Monday morning that the Latvian native had tragically passed away after an accident. A short time later, the Blue Jackets confirmed their 24-year-old goalie passed away.

In a statement, Blue Jackets president of hockey operations John Davidson highlighted Kivlenieks’ character and his presence in the locker room as two of the things player and coaches will miss the most.

“We are shocked and saddened by the loss of Matiss Kivlenieks, and we extend our deepest sympathies to his mother, Astrida, his family and friends during this devastating time. Kivi was an outstanding young man who greeted every day and everyone with a smile and the impact he had during his four years with our organization will not be forgotten.”

Kivlenks reportedly died after suffering a head injury during a fall. The team announced medical personnel were able to attend to him quickly, but he succumbed to his injuries shortly after.

He made his NHL debut during the 2019-’20 season, appearing in four games and making four starts. During that stretch, he posted a 1-1 record with two overtime losses.

The 6-foot-2 goaltender went undrafted but eventually found a home on an entry-level contract with Columbus. He began his professional career with the Cleveland Monsters, the Blue Jackets AHL affiliate.

Kivlenieks made two starts for the Blue Jackets this past season, with his last start coming on May 8. In his final game against the Detroit Red Wings, he saved 33-of-37 shots in nearly 65 minutes.

NHL commissioner Gary Bettman released a statement on the passing of Matiss Kivlenieks. He will likely be honored before the Montreal Canadiens face the Tampa Bay Lightning in Game 4 of the Stanley Cup finals.