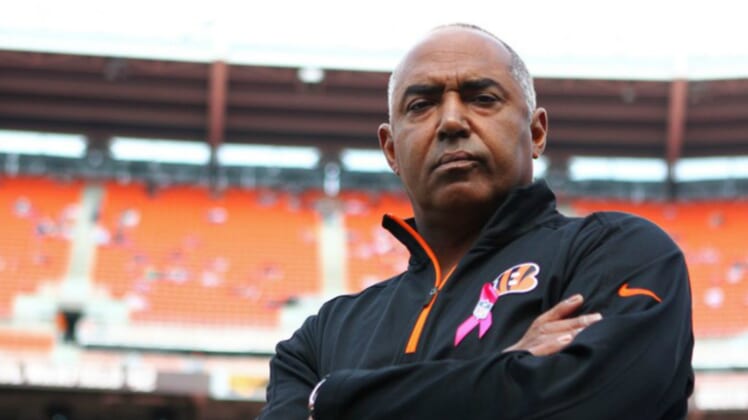 The NFL relaxed its rule about player celebration following touchdowns on Tuesday. They can use the ball as a prop, can make snow angels and can celebrate in groups. For the most part, people who cover the NFL and who participate in it thought the new rule was a fantastic change for the better. Not so for Cincinnati Bengals head coach Marvin Lewis, who, in a twist of irony, thinks it’s bad for the kids.

“I’m not for that at all,” Lewis, who is on the NFL Competition Committee, said of the change, per Katherine Terrell of ESPN. “We had a good standard and the whole standard has always been you want to teach people how to play the game the correct way and go about it the correct way, and that’s not a very good example for young people. The rules were changed for a reason and I thought we had a good outcome,” he said. “Again, this is a team game, and … I don’t understand why we want to give in to individual celebrations.”

Okay, so there will be plenty of people who agree with the sentiment that football is a team sport and individuals shouldn’t showboat. But here’s why Lewis saying what he said is so ironic: This is the same guy who has, for years, brought in players with questionable (at best) character.

Most recently, the Bengals brought on board running back Joe Mixon via the draft — a kid who has at least once in his life brutally attacked a woman, if not twice.

The Bengals also feature two defenders, Adam Jones and Vontaze Burfict (one of the dirtiest players in the NFL), who have a history of bad behavior, both on the field and off of it.

Jones has been in plenty of trouble off the field recently. He pleaded guilty to a misdemeanor, exploded in a verbal tirade over a car accident and lambasted a reporter who dared to ask a benign question about if he felt he needed to prove to fans that are expected to welcome him back.

For Lewis to get on his high horse and say touchdown celebrations are “not a very good example for young people” is about as ridiculous as it gets. He would be better served to clean up his own backyard, which has long featured bad examples for children.