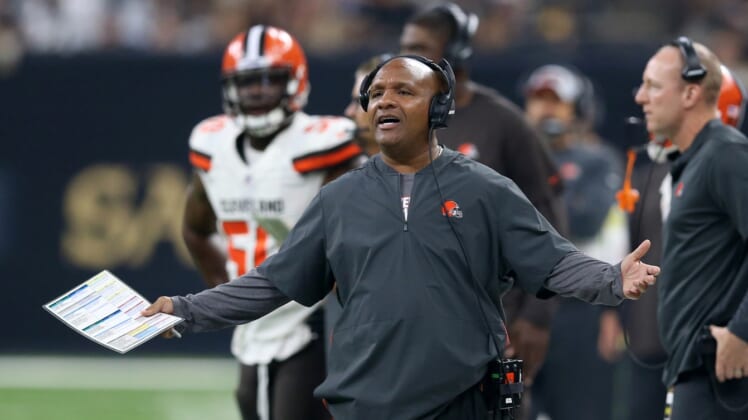 If former Cincinnati Bengals head coach Marvin Lewis has his way, Baker Mayfield will go up against his old head coach twice per season in the AFC North moving forward.

Immediately after his 16-year tenure in Cincinnati came to a conclusion on Monday, Lewis decided to endorse assistant coach Hue Jackson to be his replacement.

“I think he’s (Jackson more than qualified,” Lewis told reporters on Monday, via ESPN. “I think he’s been in a couple of difficult situations (in Oakland and Cleveland), and that’s tough, and it hasn’t broke his way. But I think he’s an excellent football coach, he’s a great motivator, he’s detailed. So I think he deserves an opportunity, if not here, somewhere else.”

Bengals fans have to be asking themselves why they can’t have good things. Jackson posted a 3-36-1 record in two-plus seasons as the Browns’ head coach. Immediately after he was fired after the first eight games of the 2018 campaign, interim coach Gregg Williams led Cleveland to a 5-3 record.

The backdrop here is a rift that grew between Jackson and rookie No. 1 overall pick Baker Mayfield after the coach signed on with the division-rival Bengals to be an assistant under Lewis.

For many, the idea of hiring a head coach that’s posted a 11-44-1 career record makes no sense. But Jackson has always been in line to replace Lewis on the sideline. Whether that comes to fruition remains to be seen.

Just keep in mind that Jackson is certainly a candidate.